Back to catalog
Lot 12 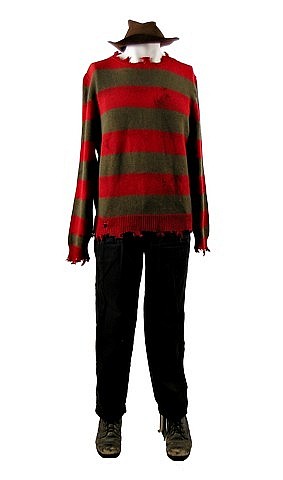 Nightmare On Elm Street 5 Freddy Krueger (Robert Englund) Full Hero Costume - Few horror franchises of the last 30 years has the staying power of "A Nightmare On Elm Street". From Wes Craven's original 1984 feature (starring a very young Johnny Depp, and of course Robert Englund as Freddy Krueger), the sight of the crooked-toothed, facially scared Freddy invading innocents dreams has become part of our American gothic lexicon. And perhaps the most iconic is his costume, from the beat-up Fedora, to the red-and-dark-green stripped sweater, black pants, to the industrial boots. From the original film to over a half dozen sequels, TV series, video games, remakes and now a brand new "Nightmare" in development, one image remains, and that is of Freddy in this iconic costume. So sought after are his actual hero screen worn costumes, that recently a hero screen worn Freddy sweater was purchased and then cut up into two-inch squares, and packaged into dozens of Plexiglas boxes. It sold out immediately. Therefore a full outfit, let alone just the sweater, is one of the most coveted collectables in horror film history. This is just that. A full hero screen worn Freddy Krueger (Robert Englund) costume from "head to foot". It includes one of his hero screen worn fedoras, hero screen worn sweaters, hero screen worn pants, and hero screen worn boots. They all come from "A Nightmare on Elm Street 5: The Dream Child" (1989). This extremely rare full hero ensemble comes from the personal collection of legendary Special Effects Coordinator Andre G. Ellingson, who worked on many of the "Nightmares", including "Dream Child" (which he also acted in), as well as "New Nightmares", and the complete "Freddy's Nightmare" TV series. Andre is also known for his work on "Buffy The Vampire Slayer", and is now the Special Effects Coordinator for the smash hit TV series "Criminal Minds". The full hero costume comes with a Letter of Provenience from Andre, as well as copies of some of his personal photographs from the set. Special note: Andre Ellingson will be at our Fangoria Auction in person and on camera to discuss this outfit and his other great items from his personal collection.