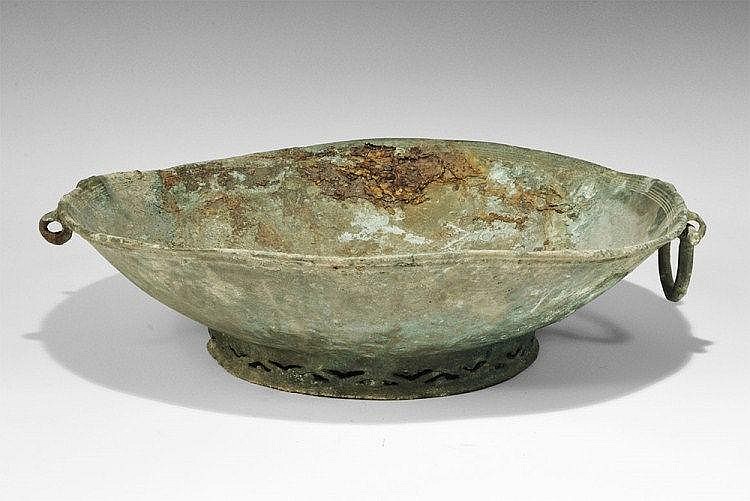 Anglo-Saxon Bronze Coptic Bowl
Late 6th-early 7th century AD. A very large Coptic bronze bowl of approximately circular form, the rim with an external ridge; cast with a pair of loops to each side for separate drop handles, one handle missing; the rim interior incised with five linear bands; the sides tapering to a ring foot with zig-zag openwork decoration; the interior of the bowl with ferrous accretions indicating where the iron ladle was placed. For an almost identical Coptic bronze bowl, cf. R.A. Smith, British Museum Guide to Anglo-Saxon Antiquities, 1923 (Ipswich 1993), fig. 90, p.77. The presence of prestige objects in this Anglo-Saxon burial from as far afield as Egypt and the Indian Ocean, indicates wealth and wide trade connections, suggesting that this was a high status burial. Found in the Cabourne area, Lincolnshire, UK, in the summer of 2005; recorded by Lincoln Museum and examined by the Finds Liaison Officer at Lincolnshire County Council; ex Bonhams Antiquities London, New Bond Street, 27 April 2006, Lot 286 (part). Other items found within this burial, but not included in this lot, were: an Anglo-Saxon bluish-green glass palm bowl, with folded rim, the hemispherical body with a thickened rounded base and pontil mark, circa 600-700 AD, iron artefacts [see lot 1054] consisting of a ladle fragment with shallow circular bowl, two iron girdle hangers and two iron latch lifters, with accompanying iron ring, a socketed spearhead of elongated leaf shape, and a fragmentary cowrie shell. 38.5 cm diameter, 11 cm high (15 diameter, 4 1/2 high").

You agree to pay a buyer's premium of up to 27.0% and any applicable taxes and shipping.