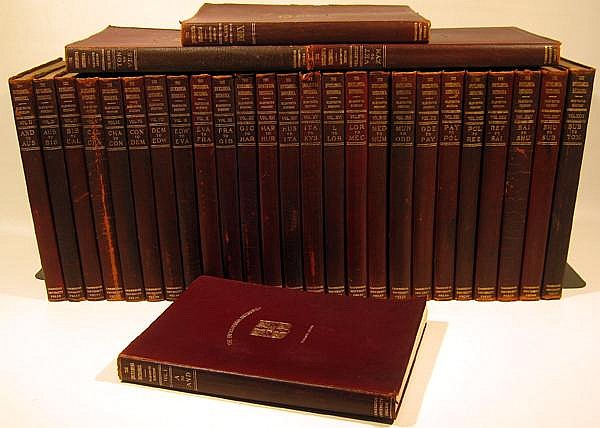 Notes: Bound in dark brown stiff leather and decorative gilt lettering and design, this antique set is considered one of the most well respected editions of the Encyclopedia Britannica. The eleventh edition (1910-1911) marked the beginning of the encyclopedia's transition from a British to an American publication. Though it is generally perceived as a quintessentially British work, the eleventh edition had substantial American influences, not only in the increased amount of American and Canadian content, but also in the efforts made to give it a more popular tone. American marketing methods also assisted sales. Some 11% of the contributors were American, and a New York office was established to run that side of the enterprise. Some articles were written by the best-known scholars of the day, such as Edmund Gosse, J. B. Bury, Algernon Charles Swinburne, John Muir, Peter Kropotkin, T. H. Huxley and William Michael Rossetti. Among the then lesser-known contributors were some who would later become distinguished, such as Ernest Rutherford and Bertrand Russell. The 1911 edition for the first time included a number of female contributors, with 34 women contributing articles to the edition. (courtesy of Wikipedia)
The eleventh edition's articles are still of value and interest to modern readers and scholars, especially as a cultural artifact: the British Empire was at its very height, imperialism was largely unchallenged, much of the world was still ruled by monarchs, and the horrors of the modern world wars were still in the future. They are an invaluable resource for topics dropped from modern encyclopedias, particularly in biography and the history of science and technology. As a literary text, the encyclopedia holds value as a voice of early 20th-century prose. For example, it employs literary devices, such as the pathetic fallacy, which are not as common in modern texts. (detail courtesy of Wikipedia)

This work is illustrated with drawings and tables throughout. These volumes show some mild external age/wear, with light shelf wear along the edges. Overall, the volumes appear to have solidly bound lightly age-toned pages. The books measure approximately 8.75" x 12".