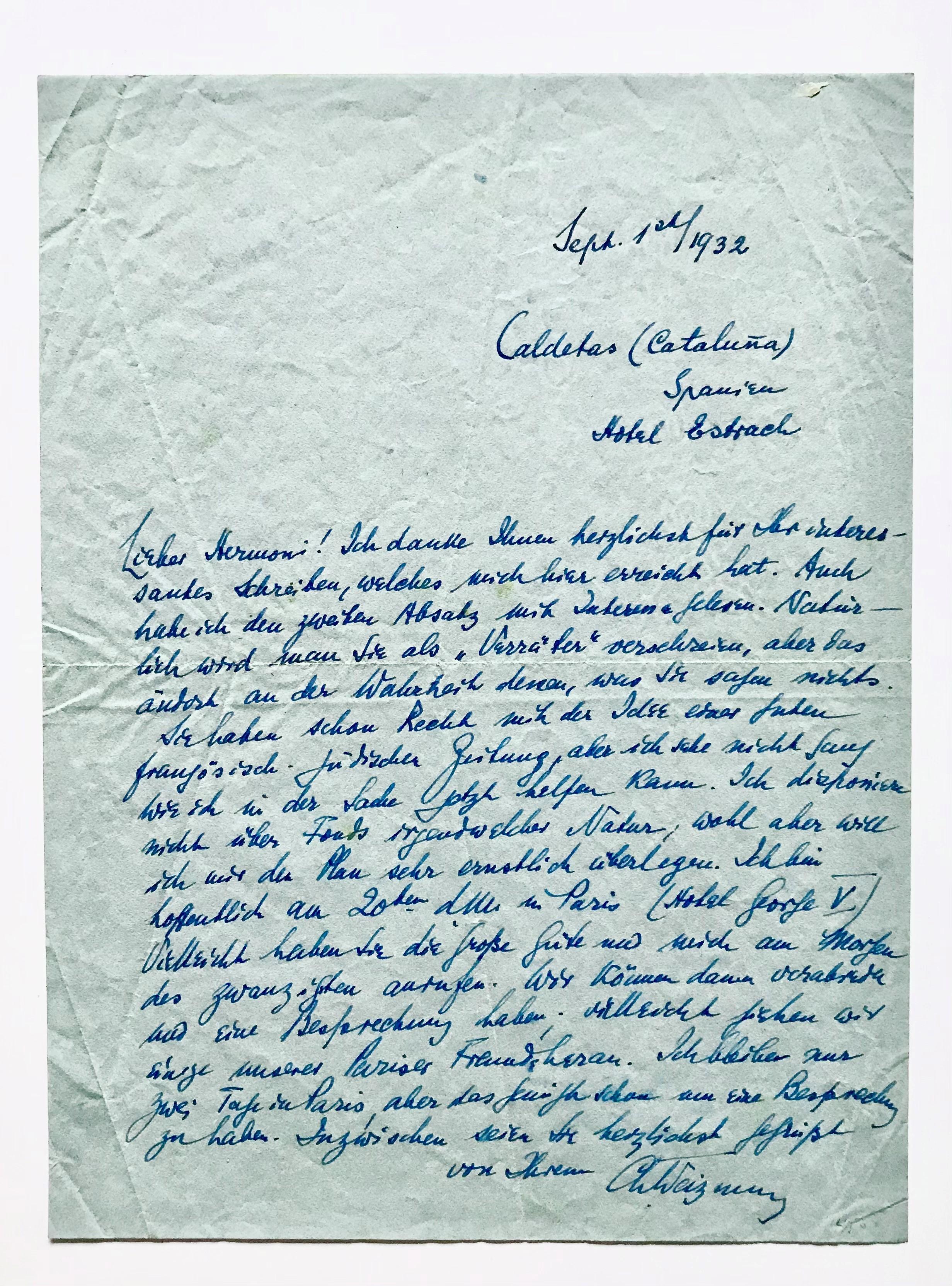 Rare Weizmann ALS: “You are quite right with the idea for a good French-Jewish newspaper"

Rare Weizmann ALS: “You are quite right with the idea for a good French-Jewish newspaper"

“I thank you for your letter which reached me here. I read the second paragraph with great interest. Of course, you will be decried a ‘traitor,’ but that does not change the truth of what you have spoken.

You are quite right with the idea for a good French-Jewish newspaper, but I don’t really see how I can help now in that matter. I do not have control over funds of this nature, but I will give the Plan serious thought. I hope to be in Paris on the 20th of the month (Hotel George V). Perhaps you will have the great kindness to call me on the morning of the 20th. Then we can set a time to have a discussion; maybe we can attract some of our Paris friends. I am staying in Paris for only two days, but that is enough for a discussion. In the meantime, I send you my warmest regards…”

After teaching chemistry at the University of Geneva, Weizmann immigrated to England where he accepted a position at Manchester University. While there, he gathered a group of Zionists that came to be known as the Manchester School whose main purpose was to disseminate information about Zionism through the publication of pamphlets, books and newspaper articles, and as president of the Jewish Agency for Palestine and the World Zionist Organization, Weizmann was instrumental in convincing the British cabinet to support a Jewish settlement in Palestine.

Our letter was written after Weizmann’s first term as head of the WZO ended with his failure to be reelected at the 17th Zionist Congress in July 1931. In 1932, Weizmann visited an increasingly politically unstable Spain (which, in 1922, had voted in favor of the British Mandate for Palestine) to discuss the future of Palestine with several government officials, including the minister of education several weeks after writing our letter. With the increase in Nazi persecution of European Jews, Weizmann devoted much of his energy during the 1930s to settling Jewish refugees in Palestine and led the WZO again from 1935-1946. After the establishment of the modern state of Israel in 1948, Weizmann was selected as the state’s first president on February 16, 1949, a position he held until his death three years later.

Hermoni edited the newspapers Haolam in Germany and Hamevasser in Turkey before relocating to France. He later became director of Israel’s Knesset press office. Prior to World War II, Europe published a significant number of Jewish newspapers and journals in Hebrew, Yiddish and many European languages. “According to the Report of the Executives of the Zionist Organization and of the Jewish Agency for Palestine, submitted to the Twentieth Zionist Congress (Zürich, August 1937), there existed 243 Zionist papers in 26 countries,” including such French publications as Cahiers Juifs, Chalom, Notre Chemin, Le Juif du Levant, La Terre Retrouvée, La Tribune Juive, and Bulletin du Comité Socialiste pour la Palestine Ouvriere, (“The Jewish Press of the Diaspora,” Jewish Social Studies, Fraenkel).