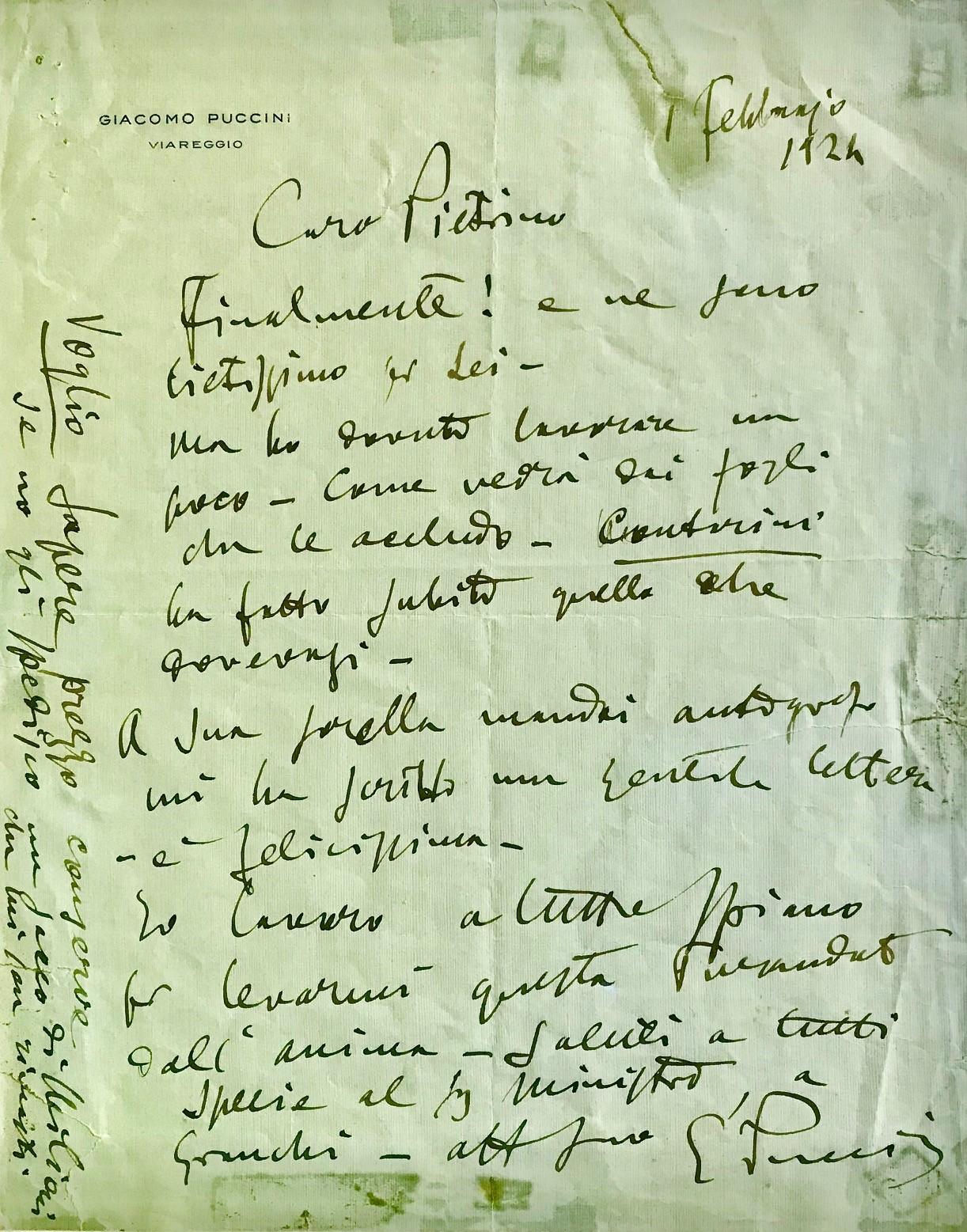 Puccini on Turandot: “I am working very hard to get Turandot out of my head,” 9 Months Before His Death

Puccini on Turandot: “I am working very hard to get Turandot out of my head,” 9 Months Before His Death

“Finally! And it makes me very happy for you. But I have had to work a little, as you can see from the sheets I am enclosing for you. Contarini has done what was needed right away.

I sent your sister [an] autograph. She wrote me a kind letter. She is very happy.

I am working very hard to get Turandot out of my head. Greetings to all, especially to Minister Granchi [sic.].”

In a postscript written vertically in the left margin:

“I want to know the price of the preserves otherwise I will send him millions [of lira] that he has not asked for.”

During his lifetime Puccini had a succession of mistresses, many of whom were opera singers. Between 1921 and 1923, he enjoyed what was likely his last affair, falling passionately in love with a young German soprano, Rose Ader, for whom he created the part of Liù in his final work, Turandot. “With Turandot Puccini felt that he was moving on to a loftier plane, that an ‘original and perhaps unique work is in the making’, compared with which all his previous music seemed to him ‘a farce.’ But no other opera cost him so much labour and toil… and no other opera filled him with such strong doubts about his creative powers,” (New Grove Dictionary). Despite his professed improved health, “towards the end of 1923 he began to complain of pains in his throat. In the autumn of 1924 three specialists diagnosed cancer,” (ibid.). Although the treatment he underwent was successful, his body was unable to bear the strain and he died November 29, 1924, leaving his last opera incomplete until finished by Franco Alfano. At the April 1926 premiere, the part of Liù was sung by Maria Zamboni instead of Rose Ader.

Our letter refers to two of Benito Mussolini’s cabinet ministers. Salvatore Contarini (1867-1945) was a career diplomat and permanent secretary to the foreign minister under Mussolini, charged with maintaining diplomatic relations with Western democracies in the early years of the Fascist regime. “All witnesses agree on Contarini’s ability and devotion to the state service. The Swiss Minister regarded him as a ‘man of rare competence,’ and his subordinates at the Palazzo Chigi had enormous respect for his judgement,” (The Diplomats, 1919-1939, ed. Craig and Gilbert). However, Contarini resigned his post in April 1925, after Mussolini began to undermine him in negotiations with Yugoslavia. Before departing, Contarini recommended Dino Grandi (1895-1988; It appears that Puccini refers to him, humorously, as “Granchi,” which is Italian for “crabs,” instead of “Grandi,” or “great”), the former undersecretary of the interior, for the new position of under-secretary to the foreign minister, which he held from May 1925 until he became foreign secretary in September 1929. Grandi “known as one of the tough young men of the Fascist movement… [who] had been party leader of Bologna and participated in the March on Rome,” went on to serve as Italy’s ambassador to the United Kingdom, minister of Grace and Justice and president of the Chamber of Fasces and Corporations, (ibid.). Increasingly critical of Mussolini and Italy’s involvement in World War II, Grandi was dropped from the cabinet in 1943 after which he introduced the resolution that led to Mussolini’s deposition and arrest. In 1944, the new Fascist government sentenced Grandi to death for treason, but he was able to flee to Spain and lived in exile until the 1960s, when he returned to Italy.

Puccini’s relationship with Mussolini and his government has been subject to much scholarly debate. “Puccini’s expression of qualified sympathy for Mussolini soon after the 1922 March on Rome is clearly documented, as is the fact that he met the dictator at least once before the composer’s death in November 1924. He also reluctantly accepted honorary Fascist Party membership and was made a senator of the realm in September 1924, a position he had coveted since before Mussolini’s assumption of power. Turandot, incomplete at the time of Puccini’s death, had a hugely successful premiere in Milan in 1926 that was attended by Mussolini, though subsequent performances were not frequent, and it would not enter the standard repertoire until a later period,” (“How to Negotiate the Tricky Territory of ‘Fascist Music,’” The Conversation, Pace).

Our letter, written nine months before the composer’s death, is folded and creased with several tears that have been inexpertly repaired on the letter’s verso resulting in some show-through: in very good condition. [indexMusic]