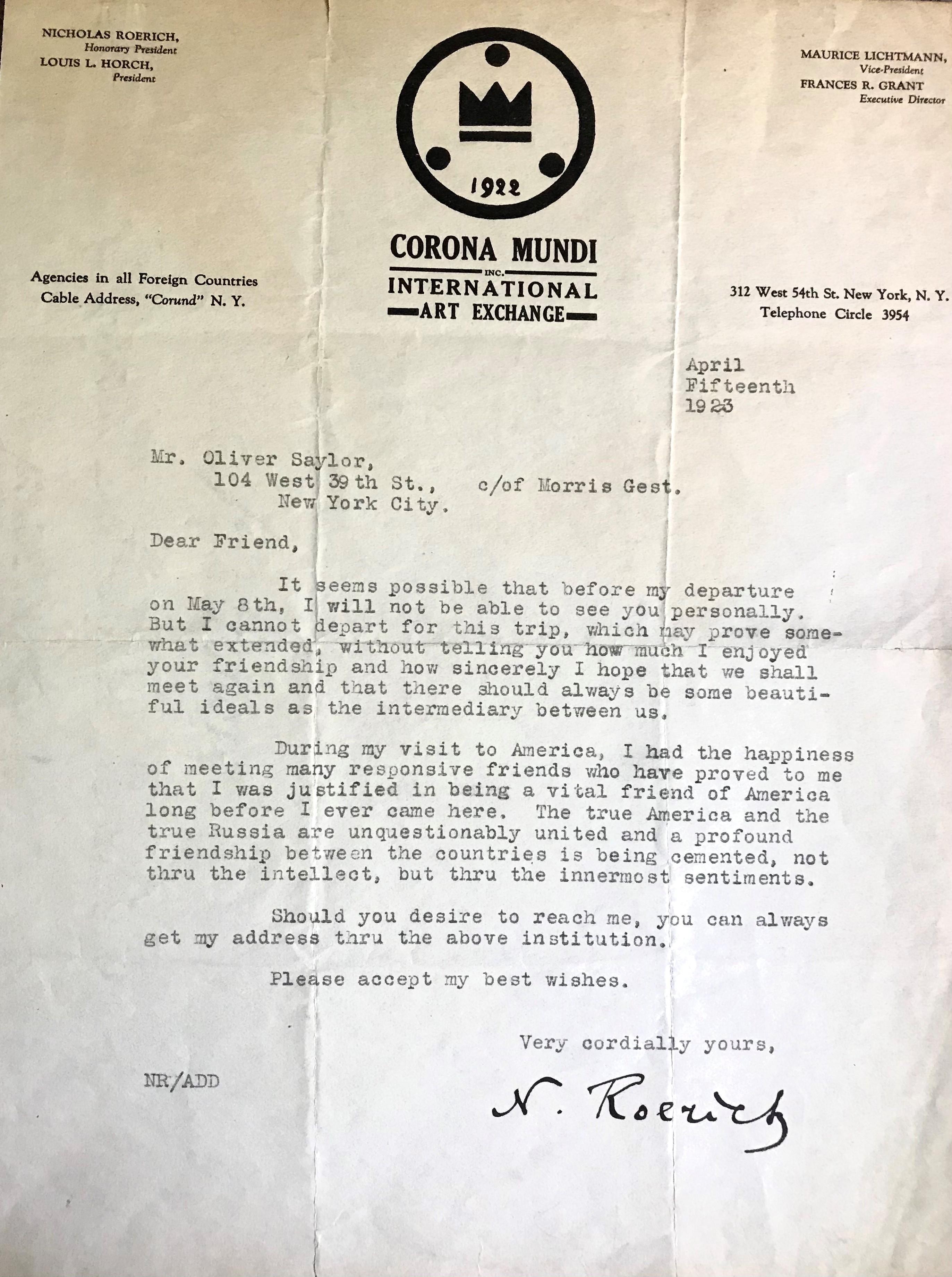 “It seems possible that before my departure on May 8th, I will not be able to see you personally. But I cannot depart for this trip, which may prove somewhat extended, without telling you how much I enjoyed your friendship and how sincerely I hope that we shall meet again and that there should always be some beautiful ideals as the intermediary between us.

During my visit to America, I had the happiness of meeting many responsive friends who have proved to me that I was justified in being a vital friend of America long before I ever came here. The true America and the true Russia are unquestionable united and a profound friendship between the countries is being cemented, not thru the intellect, but thru the innermost sentiments…”

Raised in intellectual circles in St. Petersburg, Roerich studied art at the Imperial Academy of Arts, earning renown as a painter of the Russian Symbolist school. Interested in religion, architecture and archeology, his paintings often featured spiritual or architectural subjects and he amassed a large collection of stone age artifacts. As early as 1899, he advocated for the protection of sites of cultural significance. In 1906, he exhibited his own works in Paris under the auspices of Sergei Diaghilev and, several years later, Roerich designed the sets for Diaghilev’s production of Rimsky-Korsakov’s Ivan the Terrible. Roerich’s fascination with prehistory influenced Igor Stravinsky’s ballet Le Sacre du Printemps, for which he designed the costumes and set for Diaghilev’s sensational 1913 production. Roerich was also interested in eastern and occult religions including Theosophy, all of which influenced his paintings and writing. After the 1917 Russian Revolution, Roerich, who had served as president of the World of Art Society and director of the School of the Imperial Society for the Encouragement of the Arts, urged the Bolshevik government to create a policy protecting art and architecture before immigrating to Finland.

In 1920, the Chicago Art Institute invited Roerich to the United States, where he exhibited his vast body of work throughout the country, designed sets for the Chicago Opera Company and founded the Master Institute of United Arts and the Roerich Museum in New York. Also, during his sojourn in the United States, Roerich and his wife Helena, a prominent Theosophist writer, brought their philosophy of Agni Yoga to the West. Shortly after writing our letter, in May 1923, Roerich left the United States for a five-year Bolshevik-sponsored exploration of spiritual, historical and archeological sites of India, Tibet, China, and Mongolia that culminated in establishing a settlement in the Himalayas and the foundation of the Himalayan Research Institute. From 1934-1935, Roerich participated in a U.S. Department of Agriculture expedition to Mongolia, Manchuria and China to search for solutions to soil erosion.

Over the course of his remarkable, varied career, Roerich’s most lasting achievement was likely the 1935 signing of the Roerich Pact, an international treaty he drafted to protect the world’s artistic and cultural sites. After approval by the League of Nations and Pan-American Union, it was signed by 21 nations and ratified by 10. It was the first international treaty signed in the White House. The Roerich Pact was invoked to protect monuments during World War II and formed the basis for modern international law relating to cultural heritage. He also championed trans-national understanding and peace through the founding of the American–Russian cultural Association and sought to establish a closer relationship between Russia and India, where he spent the remainder of his life. He was a three-time nominee for the Nobel Peace Prize.

Saylor wrote several books about Russian communist theater including The Russian Theatre under the Revolution, Inside the Moscow Art Theatre and Revolt in the Arts. Our letter to Saylor is addressed care of Russian-born, American theater producer Morris Gest (1875-1942), for whom he worked as a press agent.

Folded with some age toning and wear. In very good condition. Rare.