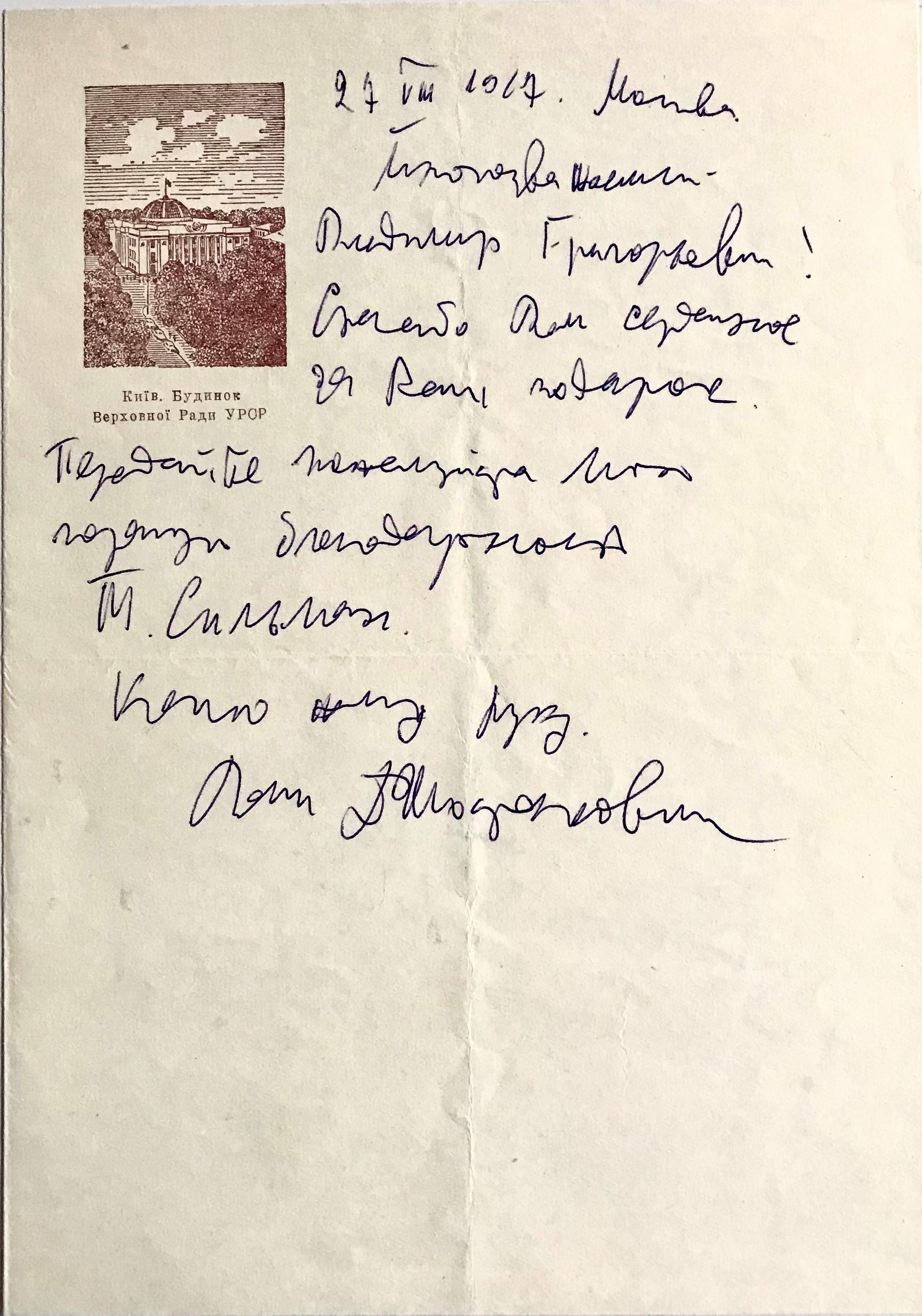 SHOSTAKOVICH, DMITRI. (1906-1975). Soviet composer, considered by many the leading symphonist of the mid-20th century. ALS. (“D. Shostakovich”). 2/3p. 8vo. Moscow, August 27, 1967. On the illustrated stationery of Kiev’s Verkhovna Rada building. To VLADIMIR GRIGORIEVICH ADMONI (1909-1993), linguist, literary critic and translator who defended Joseph Brodsky in the communist show trial of 1964. In Russian with translation.

“Dear Vladimir Grigorievich. My heart-full thank you for your gift. Please send my great appreciation to T. Silman. My warmest regards. Yours…”

Shostakovich, deeply loyal to his Russian homeland, “belonged to the first generation of Russian composers educated entirely under the Soviet system,” (The New Grove Dictionary). After the end of World War II, Stalin charged Shostakovich with writing a triumphant ninth symphony similar in magnitude to Beethoven’s last symphony. Instead, Shostakovich decided to compose a brief and somewhat whimsical piece, which received official state disapproval. Stalin’s death in March 1953 heralded a gradual political and cultural liberalization, “rehabilitating” Shostakovich who, in 1948, had been denounced in a Communist Party resolution for “‘formalistic distortions and anti-democratic tendencies alien to the Soviet people,’” (quoted in ibid.). His musical output, influenced by Igor Stravinsky and Gustav Mahler, slowed in the late 1960s when his fragile health began to show increasing signs of stress. He continued to work, but never regained his health after a serious heart ailment in 1966.

In 1965, Shostakovich lent his voice to the defense of Russian poet Joseph Brodsky who was denounced as anti-Soviet, arrested and, eventually, expelled from the USSR. Our letter’s recipient was another Brodsky’s supporter.

Despite failing health, in 1969, Shostakovich completed his Symphony No. 14 in G minor (Op. 135) – his penultimate symphony – a work comprised of eleven poems set to music. The final two movements were inspired by poems by German author Rainer Maria Rilke, translated in 1965 by Admoni’s wife, Lithuanian literary critic, philologist, professor, and translator Tamara Silman (1909-1947). “In 1965, Tamara Silman published her Russian translation of a selection of Rilke’s poems—the first translations of Rilke ever to appear in Russian. The Soviet system considered Rilke a bourgeois poet par excellence, and Silman encountered many difficulties when trying to have her translations published… In his memoirs, [My vspominajem, published 1993] Admoni writes that he had sent a copy of the translations to Shostakovich (probably shortly after their publication in 1965) and quotes an undated letter from the composer thanking him for this gift [our letter]. The notes in the 1980 Moscow score (prepared by, inter alios, the composer’s wife Irina) confirm that Shostakovich’s private library contained a copy of the selection with a complimentary inscription by Silman and Admoni. It appears, however, that Shostakovich had not procured Silman’s approval to use her translations. She discovered that he had used them only at the Leningrad premiere of the symphony in 1969. After the concert, she went backstage to thank Shostakovich for using her translations, but according to Admoni, the composer replied that it was he who should thank her and that she was the incentive (tolčok) for his selection of the Rilke poems,” (“Lost in Translation: The Rilke Poems in Shostakovich’s Fourteenth Symphony,” DSCH Journal, Nowak).

Folded with normal wear and in very good condition. [indexMusic]