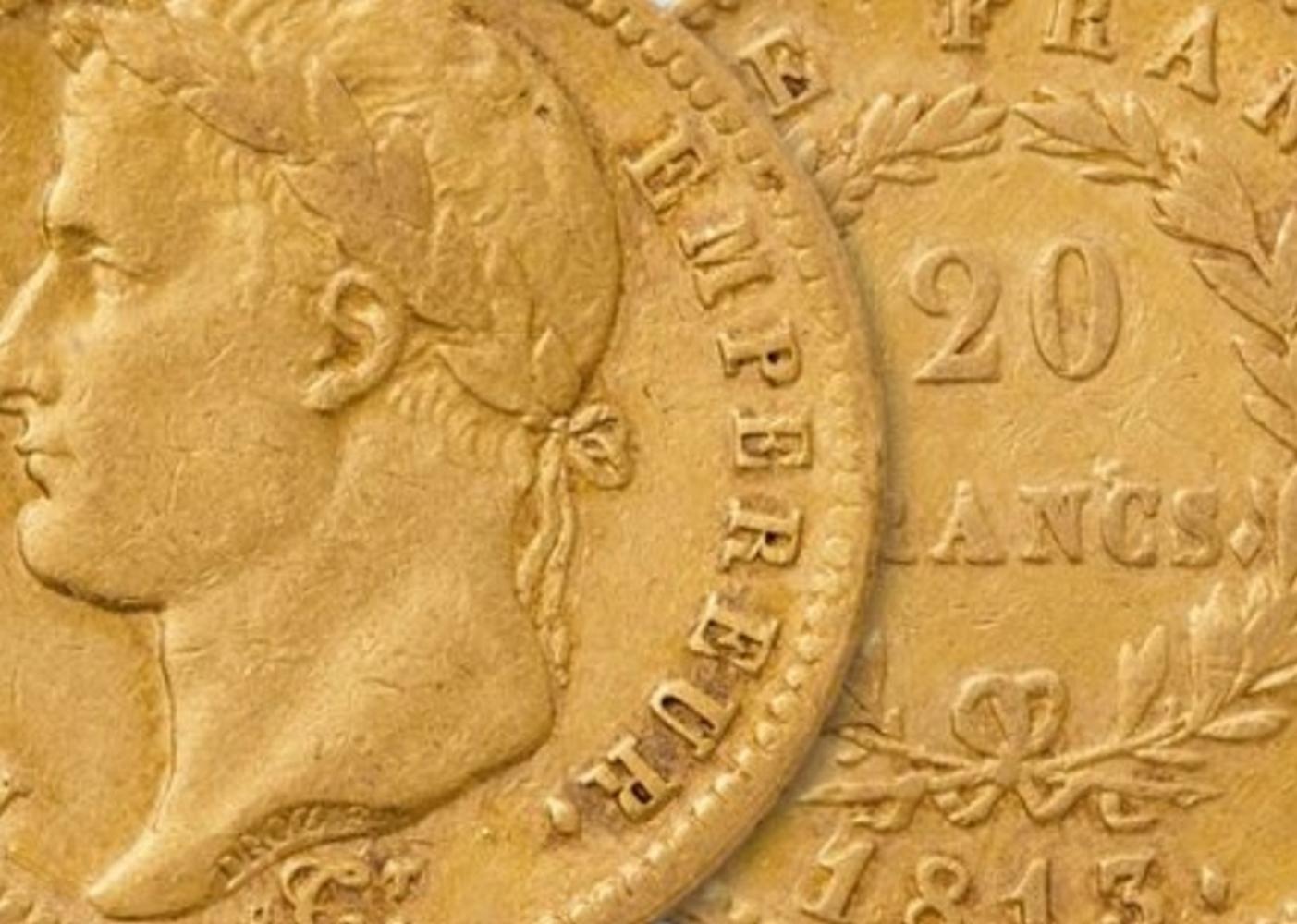 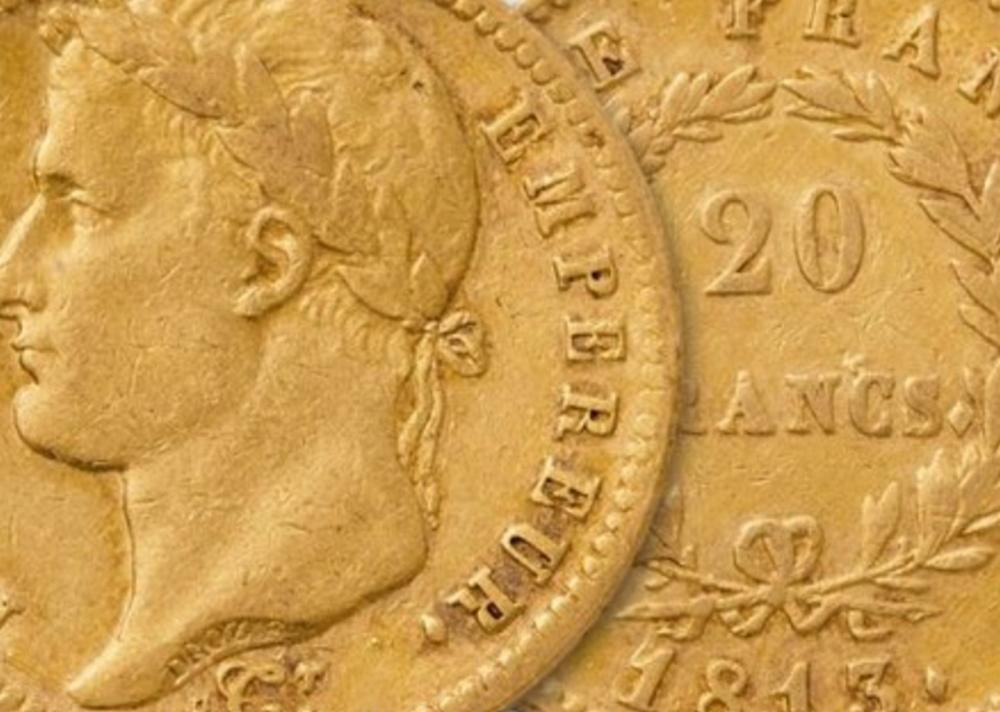 NAPOLEON I, EMPEROR OF FRANCE. (1769-1821). Military leader and Emperor of France. ADS. (“Napol, Napole, Napol, Napole, Napo, Napoleon”). 2pp. 8vo. N.p., [February 1815]. In French with translation. The Emperor’s two-page autograph list of gold coin rolls received before his impending departure from Elba, listing the number of rolls, and their packaging into four boxes numbered 1 to 4 and two travel kits (referred to by Napoléon as “necessaire”), specifying the amounts, denominations and value. Napoléon has identified numerous rolls of coins that portray him as “napoleons,” consequently the document bears his name six times in four different ways that correspond to how he signed many documents during his reign as Emperor of France.

Napoléon’s military career began in the 1780s during one of the most turbulent times in French history. Following the collapse of the monarchy, a civil war and the bloody Reign of Terror, Napoléon became famous for successfully crushing a royalist insurgency and, “sav[ing] the republic and earn[ing] the nickname General Vendemiaire,” (Encyclopedia Britannica). Rewarded with an appointment as Commander of the Army of the Interior in 1795, Napoléon transferred to the Army of Italy in 1796, gaining recognition for his victories on the Apennine peninsula.

Napoléon’s Egyptian Campaign commenced in May 1798, where his army enjoyed many early victories before suffering defeat at the hands of English admiral Horatio Nelson at the Battle of the Nile, leading British and Ottoman forces to challenge the French until August 1799 when, hearing of growing unrest in Paris, Napoléon and his weary forces withdrew. Several months later, the coup of 18 Brumaire (November 9, 1799) overthrew the Directory and appointed Bonaparte First Consul of France, a title he held until the Senate proclaimed him emperor in May 1804. For the next decade Napoléon ruled France and waged war across Europe.

Following his disastrous 1812 invasion of Russia, Napoléon was forced to abdicate and negotiate the Treaty of Fontainebleau with Austria, Russia and Prussia. The pact stripped Napoléon of his power, but allowed him to retain the title of emperor and gave him the island of Elba, located off the Tuscan coast, as his domain. Although the treaty deprived him of his royal property, it was required to provide him with armed guards and two million francs paid annually by France for the island’s administration. Napoléon arrived at Elba in May 1814 and set up his court in an opulent villa that had once belonged to the Medici family. “The island of Elba was Napoléon’s personal property, and as for the running of it, the new sovereign was to dictate… a sort of ‘constitution’ laying out the foundations. Though short (a mere three pages), the document divided the running of the sovereign island into five sub-departments, namely, civil administration (funded by land taxation), the communes (funded by various local taxes), the domains reserved for the emperor (the palaces and their respective lands, the mines, salt flats, fisheries, and the island of Pianosa), the emperor’s household and the army (financed by the emperor’s reserved domains; and when this was insufficient, the emperor’s private purse),” (Napoléon on Elba – An Exile of Consent, Hicks). While on Elba, Napoléon busied himself with the minutia of governing while assembling an army of 2,000, an Imperial Guard numbering 600 and a small navy.

In violation of the Treaty of Fontainebleau, however, the funds promised to Napoléon never arrived and he was forced to finance the administration of the island and his own household on his own. The income from mining proved less profitable than he had hoped, and taxes on Elba’s residents were not easily collected. “As Pierre Branda has shown in his book, Napoléon et l’argent, the regime on Elba could not have continued for more than another year without the money from France, as per the Treaty of Fontainebleau. Whilst it is true that the emperor could have borrowed money, he was however wary of usury and perfectly aware that loans would not have sorted out his fundamental insolvency caused by the lack of the two million. That Napoléon was unwilling to take the obvious decision of saving a great deal of money by laying off the Guard, shows that for him military protection and prestige were worth more than living on credit,” (ibid.).

Amid this worsening financial situation, Napoléon received reports from France of dissatisfaction with the return of Bourbon rule and prepared a return to France. With the departure of his English “watcher,” Neil Campbell, and in the absence of the British Navy, Napoléon began preparations to leave Elba aboard the 300-ton brig Inconstant, which, on February 16, he ordered to be provisioned and painted like an English ship.

Our document lists rolls of gold coins (many of which were commonly referred to as “napoleons”) he received upon departing the island of Elba, divided into four cases or packages numbered 1 to 4, and two containers listed as “necessaire,” a popular term at the time to denote a small case for jewelry or cosmetics, and specifying for each container the number of rolls and denominations (quadruples or napoleons), with a summary at the end and a total value in “scheling” and its equivalent in Francs.

On February 26, 1815, Napoleon left Elba, after a stay of 9 months and 21 days, with a flotilla of six vessels and more than 1,000 troops and supporters, including members of Elba’s richest families. He correctly asserted, “I shall reach Paris without firing a shot.” His arrival in France was greeted with overwhelming popular support, beginning the period known as the Hundred Days, which ended with his defeat in June by Wellington and Bluecher at Waterloo. In October 1815, Napoléon was exiled to the remote tropical island of St. Helena where he remained in exile for the rest of his life.

Despite his poor finances at the time, Napoléon used gold dust to dry the ink of our remarkable manuscript, remnants of which can still be seen clinging to the document in several places. Although fine sand was usually used to dry ink prior to the invention of blotting paper, gold dust was favored by the wealthy. The manuscript’s folds suggest that this piece of paper on which the Emperor has listed his wealth, was reduced to a small size and likely carried in his pocket as he readied himself to leave for his final campaign and ignominious defeat on the European continent. In very fine condition; a remarkable artifact written entirely in Napoleon’s hand. [indexhistory]