Back to catalog
Lot 57 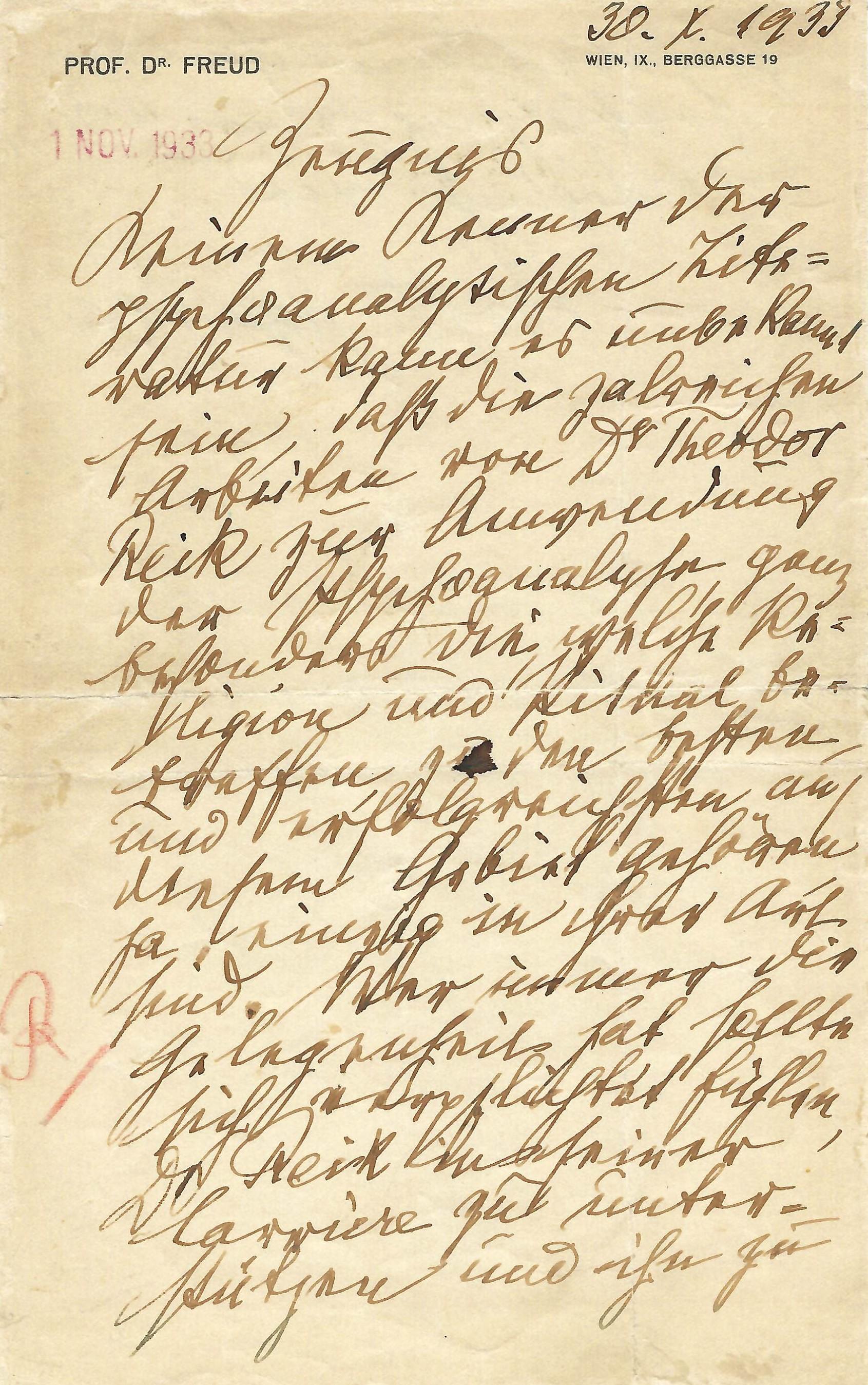 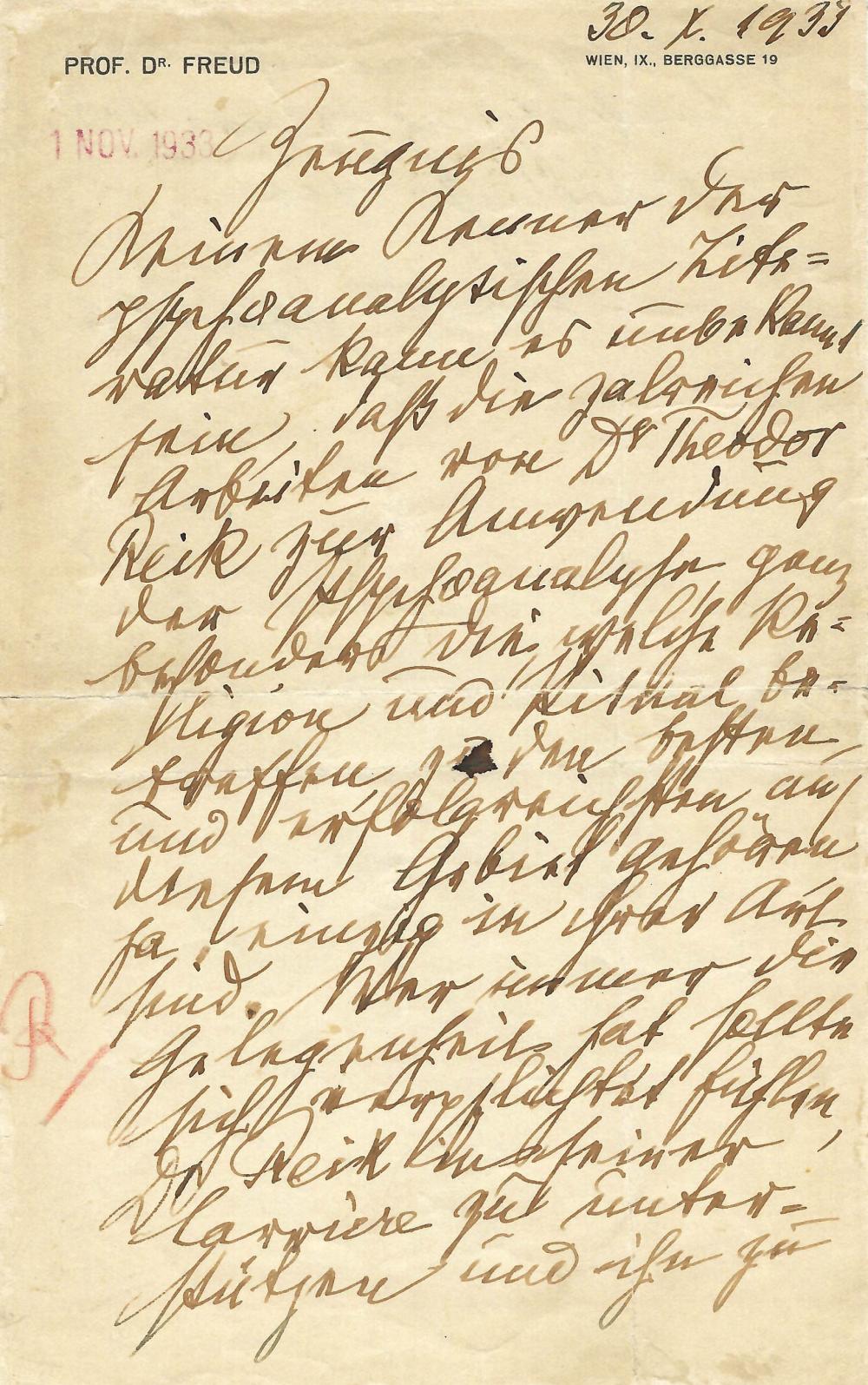 It is a well-known fact for everybody who knows psychoanalytical literature that the numerous works of Dr. Theodor Reik about the application of psychoanalysis, especially those concerning religion and ritual, are among the best and most influential in the field, I would say even one of a kind. Whosoever has the opportunity should feel obligated to support Dr. Reik’s career and to assist him in order to enable him to continue his work…”

“Psychology is the scientific endeavor to master your own emotions using the object of another person through scientific understanding. If you want to know yourself, seeing how others fare forms only the less important intellectual side of this process where the direction is indicated correctly. When you see how others fare and compare yourself consciously with them, you will not profit much. [It is the] Beginning of understanding.”

Trained as a neurologist, Freud founded psychoanalysis, a clinical method for treating psychoses, after studying with the French expert in hypnosis and hysteria, Jean-Martin Charcot, from 1885-1886. Freud’s ground-breaking The Interpretation of Dreams appeared in 1899, and by 1902 he had acquired a number of like-minded colleagues who formed the Wednesday Psychological Society – later known as the Viennese Analytic Society – a weekly gathering in which physicians discussed psychoanalysis.

Reik’s friendship with and tutelage under Sigmund Freud began after their initial meeting in 1911, while Reik was earning his degree in psychology from the University of Vienna. Reik participated in Freud’s Wednesday night meetings, and Freud supported him financially while he was a student. In 1911, Reik completed the first doctoral dissertation on psychoanalysis, after which he practiced psychoanalysis in Vienna, despite the lack of a medical degree, making him one of the earliest pioneers of “lay” analysis. In 1925, as a non-medical doctor, he was prohibited from practicing medicine, and shortly thereafter was sued by a former patient. Both events prompted Freud to publicly defend Reik and lay analysis, culminating in Freud’s 1926 publication of The Question of Lay Analysis.

After the lawsuit, Reik relocated to Berlin where he practiced and taught psychoanalysis until 1934, when ongoing Nazi persecution of Jews, which had begun in earnest since the spring of 1933, prompted his immigration to the Netherlands and, four years later to the United States. In the U.S. he again encountered disapproval due to the absence of a medical degree and was denied membership in the New York Psychoanalytical Society. This event led Reik to found the National Psychological Association for Psychoanalysis, which legitimized lay analysis in the United States.

Freud and Reik remained close friends until Freud’s death in 1939. Interestingly, Reik’s handwriting bears a strong resemblance to that of his teacher, and in his later years, Reik grew a beard and looked remarkably similar to his mentor.

“Reik wrote many psychoanalytic articles on literary and musical figures such as Flaubert and Mahler, on clinical and anthropological themes, and on psychological theory. Four of his best-known papers of the 1920s were collected in Das Ritual, psychoanalytische Studien,” (“Theodor Reik,” Jewish Virtual Library). Deeply interested in the Jewish religion, Reik published numerous significant books on the subject of psychoanalysis and religion, including Der eigene und der fremde Gott. Neuausgabe: Der eigene und der fremde Gott: zur Psychoanalyse d. religiösen Entwicklung (1923), Ritual: Four Psychoanalytic Studies (1946), Myth and Guilt (1957) and Pagan Rites in Judaism (1964). His most influential work is Listening with the Third Ear published in 1948.

Folded and creased. Docketed with an ink date stamp in the upper left corner (“1.NOV. 1933”) of the first page as well as a red pencil “R” in the left margin. Slightly browned and moderately worn in the fold. Reik’s manuscript is also folded and creased with some light dust staining. On the verso of Reik’s manuscript he has twice written in blue pencil, “Mahler – Psychologie.” [indexJudaica]