Back to catalog
Lot 31 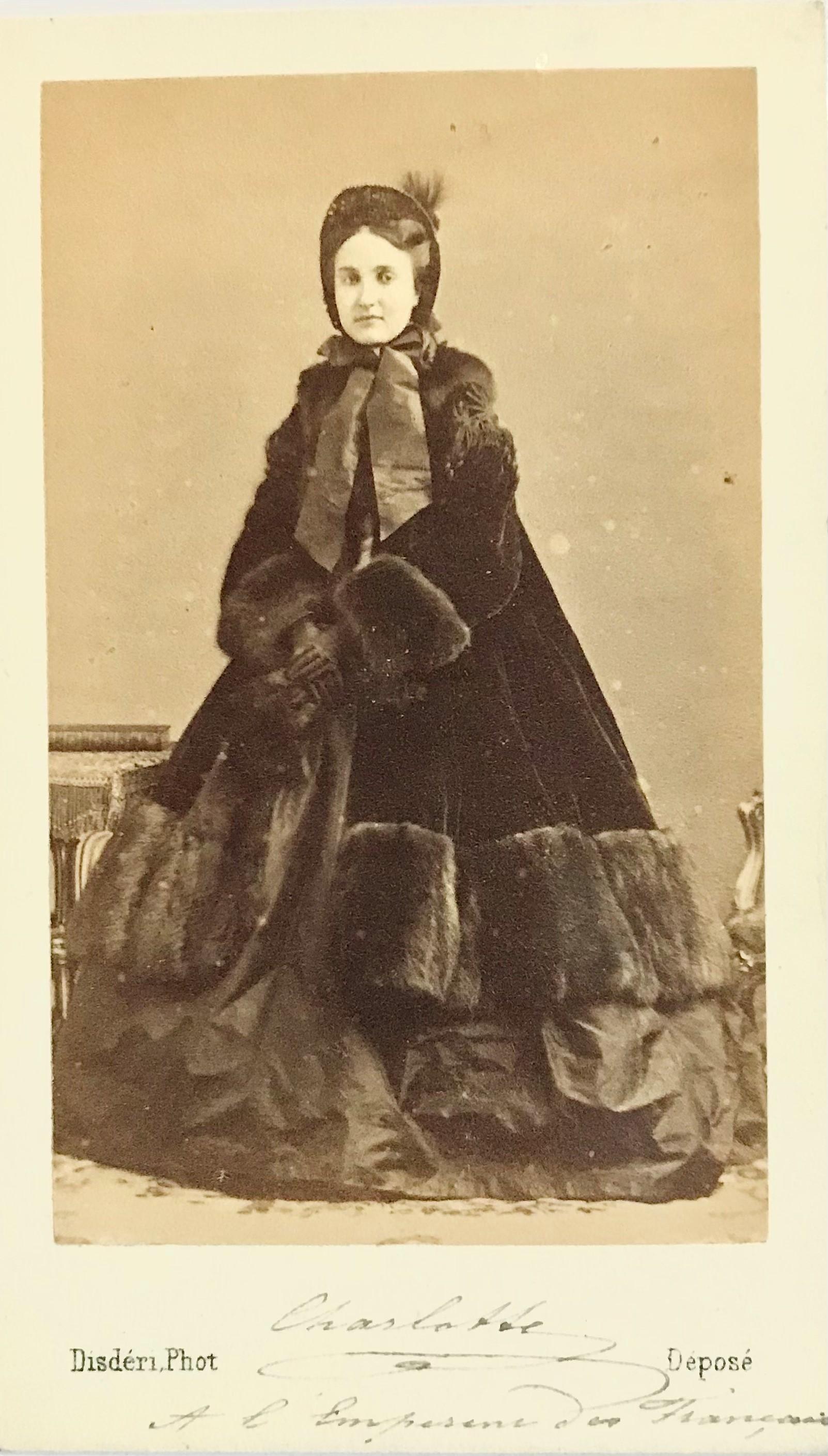 Unique Carlota of Mexico CDV to Emperor Napoleon III, Whom She Soon Regarded as “the Principle of Evil in the World”

Unique Carlota of Mexico CDV to Emperor Napoleon III, Whom She Soon Regarded as “the Principle of Evil in the World”

CHARLOTTE. (1840-1927). Daughter of Leopold I of Belgium and consort of Austrian Archduke Maximilian, later Emperor Maximilian of Mexico. SP (“Charlotte”) 1p. CDV. N.p., N.d. (likely Paris). A unique and magnificent association photograph inscribed to French Emperor NAPOLEON III (1808-1873), “A l’Empereur des Francais.” The photographer, Andre-Adolph-Eugene Disderi (1819-1889), is considered the inventor of the popular carte-de-visite photograph and, according to the logo printed on the verso, the photographer to Emperor Napoleon III of France. Charlotte is photographed, full length, wearing an elegant fur paletot.

The youngest child and only daughter of Leopold I and his second wife, Louise-Marie, Charlotte was a merry child, extremely close to her father, whose confidante she became after her mother’s untimely death at thirty-eight, and to her grandparents, with whom she maintained a lively and detailed correspondence. Indeed, “Louise-Marie’s death meant not the slightest break with the Orleans family; contact always remained warm and... the children also remained friendly with their Orleans uncles and aunts...” (Charlotte: La Passion et la Fatalite, Kerckvoorde). However, the deaths of both her grandfather and mother in quick succession gradually transformed the cheerful princess into a withdrawn, introspective soul, not unlike her beloved father. It was this reserved beauty who, at seventeen, married Maximilian, the brother of Austrian Emperor Francis Joseph.

In 1863, following France’s partial conquest of Mexico, Maximilian was offered the country’s crown by a group of prominent Mexicans acting under the direction of Napoleon III. At his wife’s insistence and with his brother’s blessing, the couple arrived in Mexico a year later to assume power in a country overwhelmingly unwilling to accept Hapsburg rule. Charlotte took her role as empress seriously, changing her name to the Spanish “Carlota,” and making an official tour of the Yucatán. However, the couple’s efforts were destined to be short lived. With the United States’ refusal to recognize his legitimacy, and Napoleon III declining to provide further military or economic support, Maximilian was left to the mercy of Mexican nationalist Benito Juarez and his army. Captured by Juarez’s troops on May 15, 1867, he was executed by firing squad a month later.

Charlotte, who had left Mexico earlier in the hope of regaining the support of Napoleon III, Eugenie and even Pope Pius IX, suffered a nervous breakdown and outlived her husband by sixty years, a victim, not generally known, of paranoid schizophrenia. Writing to Maximilian on August 22, 1866, after her failed attempt to secure aid from Napoleon and Eugenie, the fragile Empress notes: “Il veut commettre une mauvaise action prepare de longue main, non par lachete, decouragement ou toute aure raison, mais pare qu’il represente le principe du Mal dans le monde et veut ecarter le Bien, afin que l’humanite ne voie pas que son oeuvre est mauvaise, et qu’elle l’adore.” (“He means to commit a long-premeditated evil deed; not out of cowardice or discouragement or for any reason whatsoever, but because he is the Evil principle upon earth and wants to get rid of the Good. Only humanity does not see that his deeds are evil, and they adore him.”)