Back to catalog
Lot 28 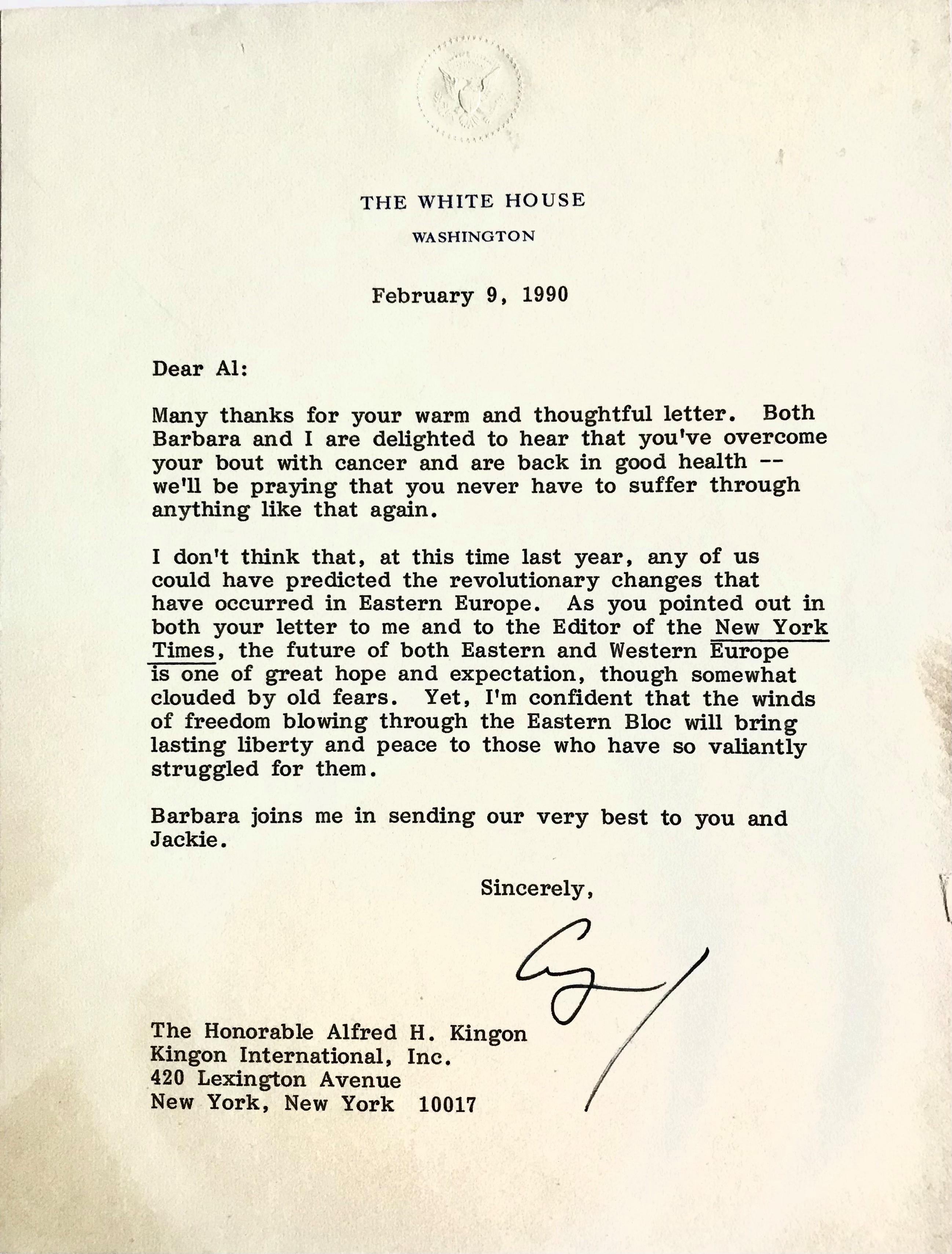 Pres. Bush on Developments in Europe: "I am confident that the winds of freedom blowing through the Eastern Bloc will bring lasting liberty and peace to those who have so valiantly struggled for them”

Pres. Bush on Developments in Europe: "I am confident that the winds of freedom blowing through the Eastern Bloc will bring lasting liberty and peace to those who have so valiantly struggled for them”

“Many thanks for your warm and thoughtful letter. Both Barbara and I are delighted to hear that you’ve overcome your bout with cancer and are back in good health – we’ll be praying that you never have to suffer through anything like that again.

I don’t think that, at this time last year, any of us could have predicted the revolutionary changes that have occurred in Eastern Europe. As you pointed out in both your letter to me and to the Editor of the New York Times, the future of both Eastern and Western Europe is one of great hope and expectation, though somewhat clouded by old fears. Yet, I’m confident that the winds of freedom blowing through the Eastern Bloc will bring lasting liberty and peace to those who have so valiantly struggled for them…”

After serving in the U.S. Navy, Bush, the son of a Connecticut Senator, entered the oil business and became a millionaire by age 40. He was a successful politician, representing Texas in the House of Representatives from 1967-1971. President Nixon appointed him U.S. Ambassador to the United Nations, and, under President Ford, he served as a diplomat in China. He was the Director of CIA for one year before joining Ronald Reagan’s presidential ticket, serving two terms as vice president. In 1988, he ran for president and defeated Democratic rival, Michael Dukakis. The Bush administration witnessed the invasion of Panama, the Gulf War, the signing of the North Atlantic Free Trade Agreement (NAFTA), and the collapse of the Soviet Union. In 1992, Bush ran for reelection but was defeated by Arkansas Governor Bill Clinton.

In 1988, Soviet Premier Mikhail Gorbachev’s power was challenged in the wake of a growing independence movement in the Soviet republics. The USSR attempted to introduce elements of democracy, which inspired further unrest in Eastern Europe, especially in Poland where the Solidarity movement staged strikes that ultimately forced parliamentary elections. Revolution spread to Hungary, which took down its barbed wire border fence with Austria, the first break in the so-called Iron Curtain that separated the Soviet East from the democratic West. In Czechoslovakia, the Velvet Revolution ended one-party communist rule with free elections in December 1989. The most iconic event of the period was the fall of the Berlin Wall, which had separated West and East Germany, on November 9, 1989, beginning the process of German reunification that was finalized with the dissolution of East Germany in October 1990.

In quick succession, almost all the Soviet Socialist Republics declared their independence starting with Lithuania in 1990, followed by Estonia, Latvia, Ukraine, Georgia, Belarus, Armenia, Azerbaijan, Kazakhstan, Kyrgyzstan, Moldova, Turkmenistan, Tajikistan, and Uzbekistan, an event referred to as the “parade of sovereignties.” Civil war and violence in the Caucasus further weakened Moscow’s hold on power. The Socialist Federal Republic of Yugoslavia also began breaking up in January 1990, which led to years of political instability in its former republics, including Bosnia and Herzegovina, Montenegro, and Serbia. The Soviet Union ceased to exist on December 8, 1991, upon the establishment of the Commonwealth of Independent States.

Our letter was written during these events to Kingon, a Wall Street investment adviser and publisher of Financial World and Saturday Review. Kingon served as Assistant Secretary of Commerce from 1983-1984 and President Reagan’s cabinet secretary from 1985-1987, where he played “a central role in domestic, agricultural, economic and trade policy,” and the U.S. ambassador to the European Union from 1987-1989, (“Working Profile: Alfred H. Kingon; Being a Fly on White House Wall and Loving It,” The New York Times, Weinraub). Our letter mentions First Lady Barbara Bush (1925-2018), who worked for the advancement of literacy in the United States.