Back to catalog
Lot 27 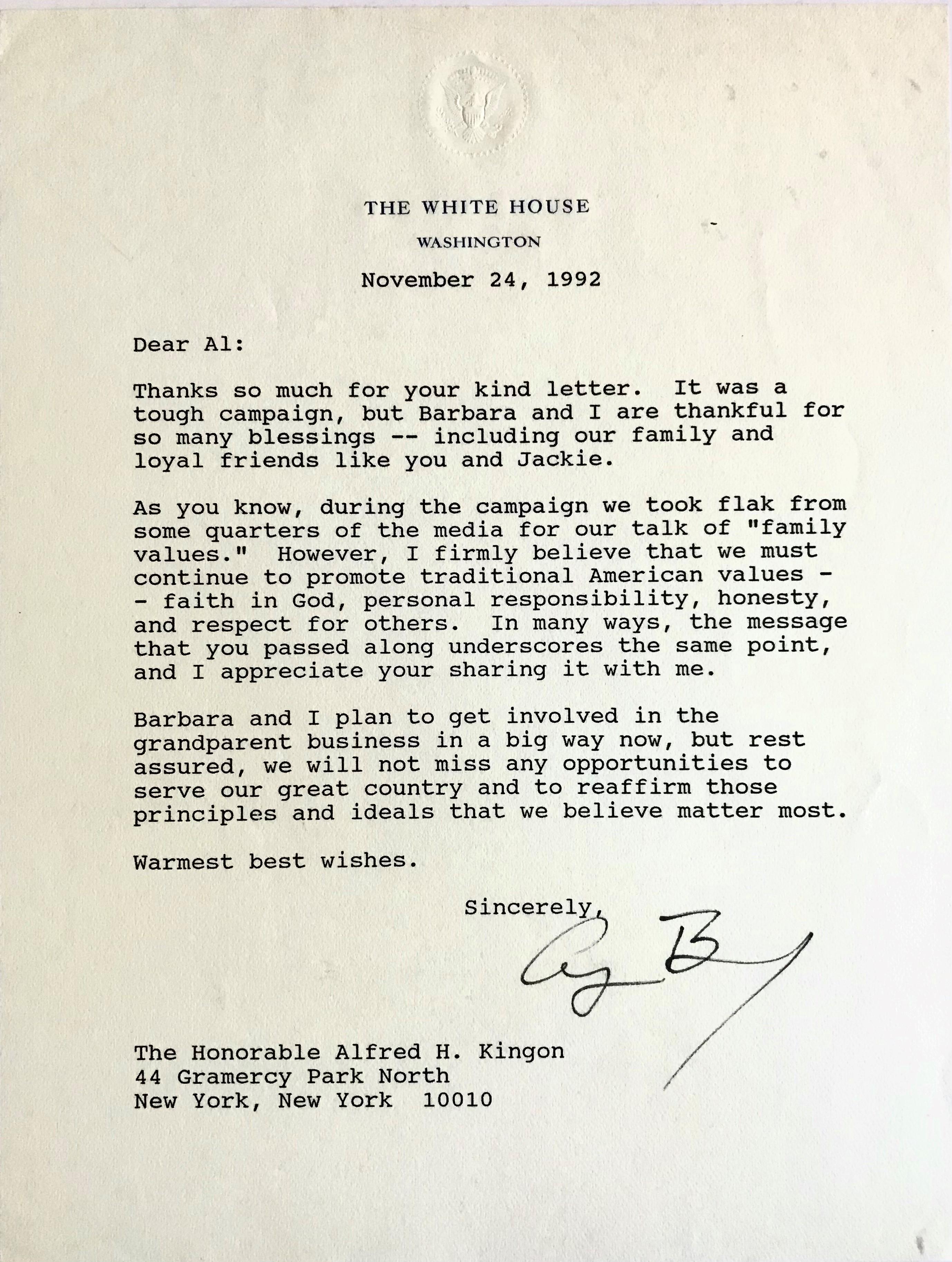 George Bush After his 1992 Defeat: “I firmly believe that we must continue to promote traditional American values – faith in God, personal responsibility, honesty, and respect for others”

George Bush After his 1992 Defeat: “I firmly believe that we must continue to promote traditional American values – faith in God, personal responsibility, honesty, and respect for others”

“Thanks so much for your kind letter. It was a tough campaign, but Barbara and I are thankful for so many blessings – including our family and loyal friends like you and Jackie.

As you know, during the campaign we took flak from some quarters of the media for our talk of ‘family values.’ However, I firmly believe that we must continue to promote traditional American values – faith in God, personal responsibility, honesty, and respect for others. In many ways, the message that you passed along underscores the same point, and I appreciate your sharing it with me.

Barbara and I plan to get involved in the grandparent business in a big way now, but rest assured, we will not miss any opportunities to serve our great country and to reaffirm those principles and ideals that we believe matter most…”

After serving in the U.S. Navy, Bush, the son of a Connecticut Senator, entered the oil business, becoming a millionaire by age 40. He was a successful politician and represented Texas in the House of Representatives from 1967-1971. President Nixon appointed him U.S. Ambassador to the United Nations, and, under President Ford, he served as a diplomat in China. He was Director of the CIA for one year before joining Ronald Reagan’s presidential ticket, serving two terms as vice president. In 1988, he ran for president and defeated Democratic rival, Michael Dukakis. The Bush administration witnessed the invasion of Panama, the Gulf War, the signing of the North Atlantic Free Trade Agreement (NAFTA), and the collapse of the Soviet Union. In 1992, Bush ran for reelection but was defeated by Arkansas Governor Bill Clinton on November 3, just a few weeks prior to our letter.

Despite campaigning on his popular handling of the Gulf War, Bush faced much criticism during his campaign for the 1990-1991 recession, with economic recovery remaining sluggish. Throughout the campaign, to distract from the state of the economy, Bush focused on “family values.” In May 1992, his vice-presidential candidate Dan Quayle criticized the popular television show Murphy Brown for portraying single motherhood, which he felt was detrimental to traditional family values and for which he was vociferously criticized. By September, the New York Times reported that “much of President Bush’s campaign is still directed at avoiding the harsh tone of the ‘family values’ oratory [at the Republican National Convention] in Houston, which party strategists have agreed was a mistake that damaged Mr. Bush’s re-election effort. In interviews… senior campaign and White House officials said the hostility expressed at the convention toward homosexuals, feminists, welfare recipients and women who identify with Hillary Clinton was a result of a strategy that was poorly managed and consequently ran amok,” (“Bush Tries to Recoup from Harsh Tone on ‘Values,’” The New York Times, Rosenthal). Nonetheless, in October, Bush again brought up family values in relation to welfare reform. Ultimately, the U.S. economy was Bush’s downfall, with Clinton’s campaign strategist James Carville famously remarking, “It’s the economy, stupid.”

Kingon, was a Wall Street investment adviser and publisher of Financial World and Saturday Review. He served as Assistant Secretary of Commerce from 1983-1984 and President Reagan’s cabinet secretary from 1985-1987, where he played “a central role in domestic, agricultural, economic and trade policy,” and the U.S. ambassador to the European Union from 1987-1989, (“Working Profile: Alfred H. Kingon; Being a Fly on White House Wall and Loving It,” The New York Times, Weinraub). Our letter mentions First Lady Barbara Bush (1925-2018), who worked for the advancement of literacy in the United States.