Back to catalog
Lot 18 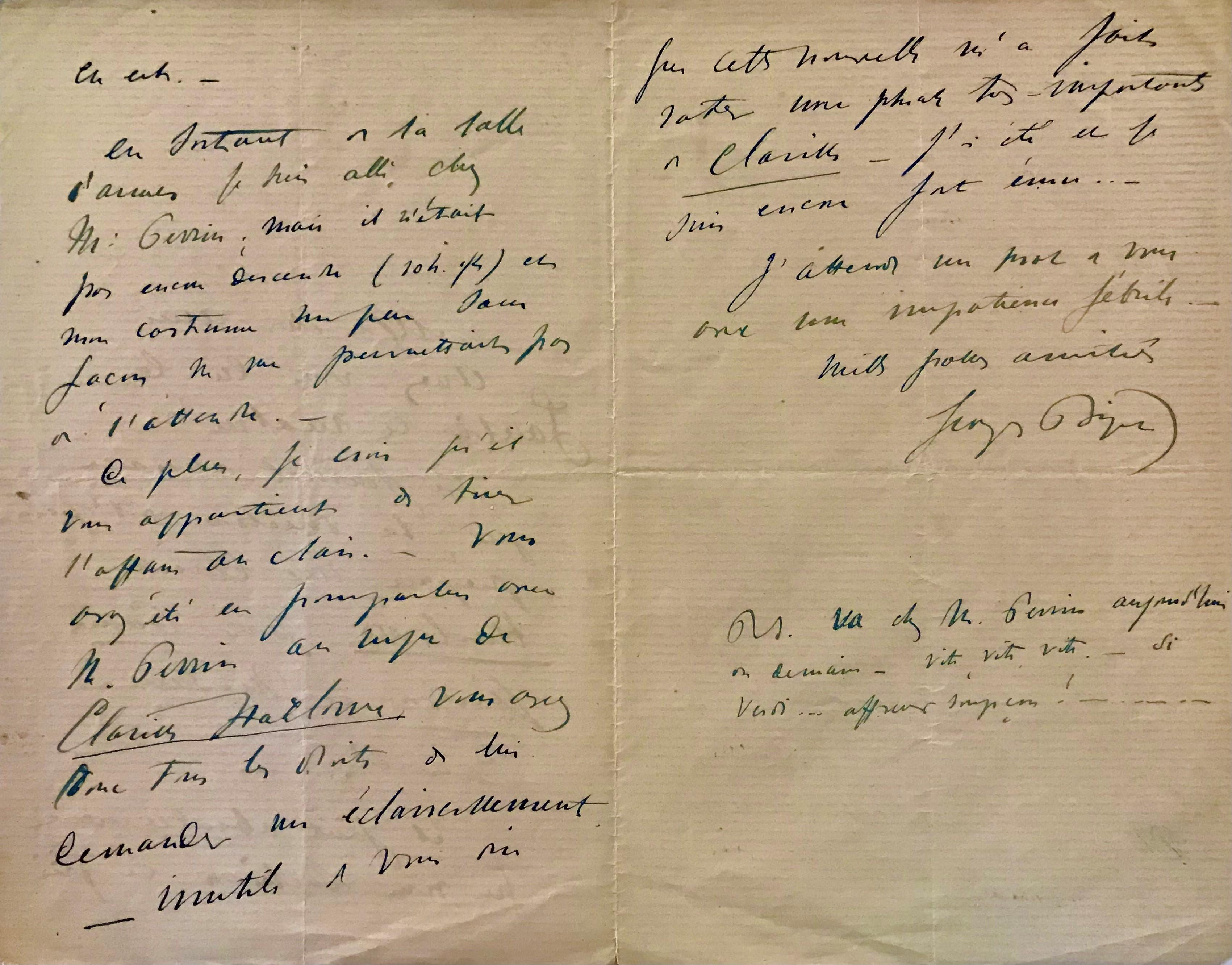 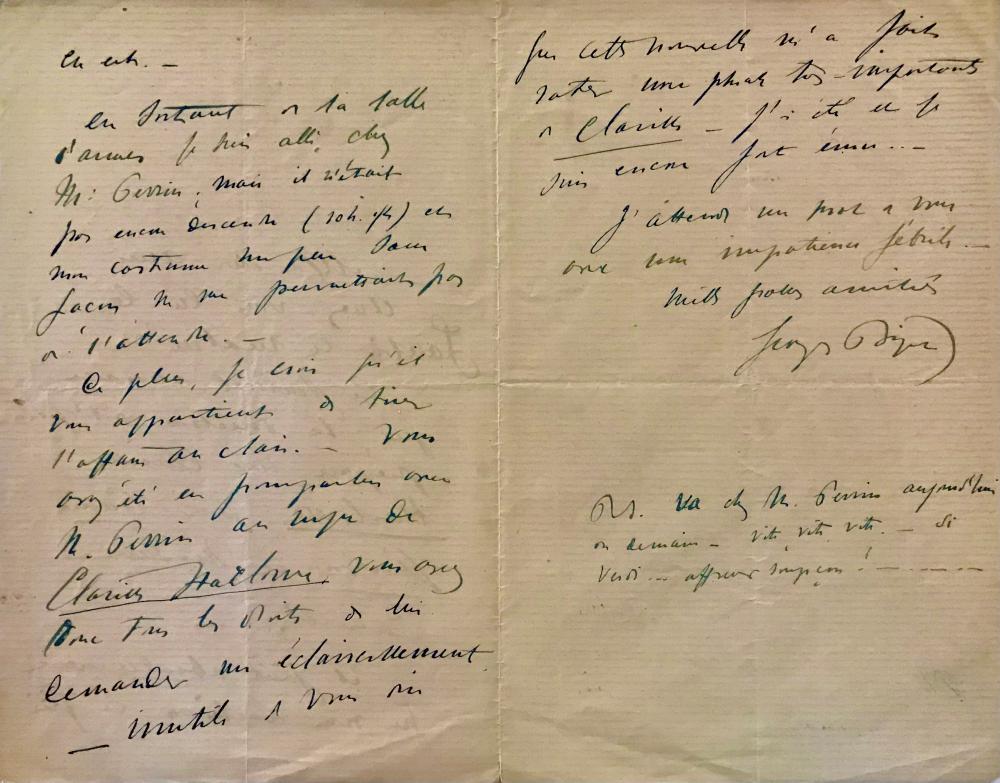 “Have you read this morning’s Le Gaulois?

This newspaper is announcing that the Opera management is preparing a Clarisse Harlowe for Fauré, Genevois [?] and Madame Carvalho. It is absolutely necessary that we know what it is. On leaving the armory I went to Mr. Perrin’s house; but he hadn’t come down yet (10:15 a.m.) and the rather informal style of my costume did not persuade me to stay. Moreover, I believe that it is up to you to get to the bottom of this. – You have been in talks with Mr. Perrin about Clarisse Harlowe, so you have every right to ask him for clarification. – Needless to say, this news has made me miss a very important phrase from Clarisse – I was and am still very moved... I am waiting for a word from you with feverish impatience…

With the strongest feelings of friendship…

Bizet’s compositional abilities were recognized early while studying at the Paris Conservatory, when, in 1857, he won both the Offenbach Prize and the Prix de Rome with his cantata Clovis et Clotilde. After two years in Rome, Bizet returned to Paris where he struggled as a composer, taking on pupils and working as an accompanist and arranger. During this time, he submitted numerous works to impresario Léon Carvalho, who produced Bizet’s Les pêcheurs de perles in 1863 and La jolie fille de Perth in 1867. Our letter regards the early stages of Bizet’s opera based on Samuel Richardson’s novel Clarissa Harlowe (one of the longest novels in the English language). Bizet sketched the first two acts and the beginning of the third before work was cut short by the outbreak of the Franco-Prussian war in July 1870. “Bizet later rescued four pieces from Clarisse Harlowe and arranged them as songs or duets with new words. The solo songs “Aubade”, “La Nuit”, “Voyage” and “Si vous aimes," all published after Bizet’s death, have their origins here,” (Bizet, Macdonald). The lyrics were supplied by librettist Philippe Gille, secretary of the Théâtre Lyrique and a music critic for Le Figaro. Gille later wrote the librettos for Massenet’s 1884 Manon and Léo Delibes Lakmé.

In 1872, Carvalho commissioned Bizet to compose music for L’Arlésienne, a play based on Alphone Daudet’s short story, staged at the Vaudeville Theatre. Carvalho was the husband of the acclaimed soprano Marie Caroline Miolan-Carvalho (1827-1895), known for her performances of Mozart, Rossini and Gounod at the Théâtre Lyrique and Opéra-Comique.

Bizet began work on Carmen, considered his masterpiece, in 1873 and by the following year he was completing the orchestration. Casting problems, troublesome musicians and Bizet’s poor health delayed its premiere at the Opéra-Comique until March 3, 1875. Prior to the premiere, theater impresario Émile Perrin (1814-1885), who during the 1860s had engaged Bizet to perform scores submitted to the Opéra de Paris and who was critical of Carmen, arbitrated a dispute between Bizet and the Opéra’s directors. Unfortunately, the public’s disliked Carmen and the press denounced the music and the libretto as obscene. The passage of time, however, has elevated Carmen to where it is now regarded as “the supreme achievement of Bizet and of opéra comique, a genre it completely transformed” (The New Grove Dictionary).

In a postscript, Bizet seems to make a cryptic reference to Italian opera composer Giuseppe Verdi (1813-1901). Our letter also mentions Bizet’s friend French baritone and composer Jean-Baptiste Faure (1830-1914), a star of the Opéra. Le Gaulois was a French newspaper published between 1868 and 1929, when it was acquired by Le Figaro.

Partially published in The Bizet Catalogue at Washington University (“Clarisse Harlow opéra-comique en trois actes,” http://digital.wustl.edu/bizet/works/Clarisse_Harlowe.html). Penned on a folded sheet which is folded with some light age wear. In fine condition. [indexMusic]