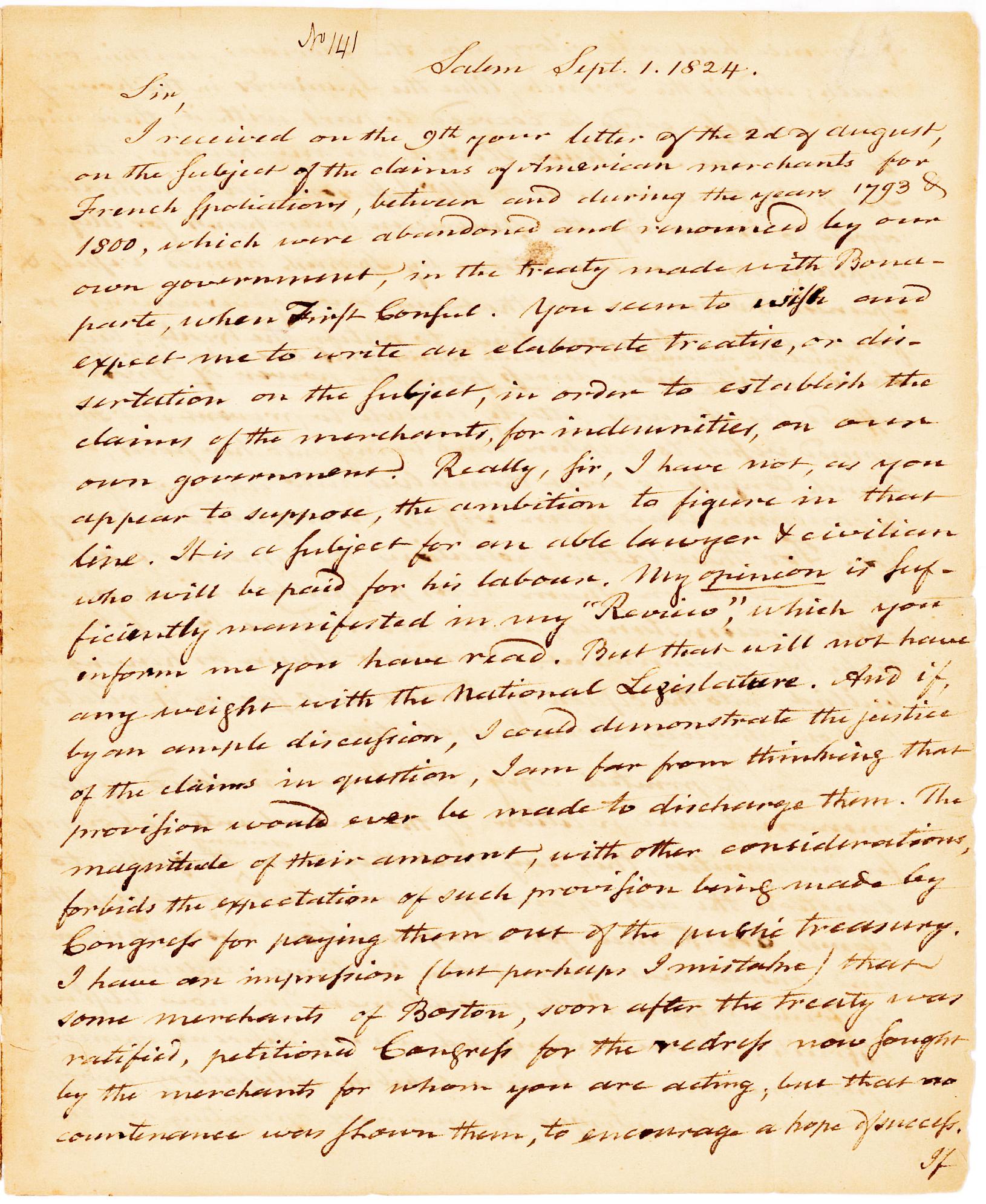 Pickering Turns Down a Lobbyist and Mentions Jefferson, Adams, Napoleon and Postage Fees! 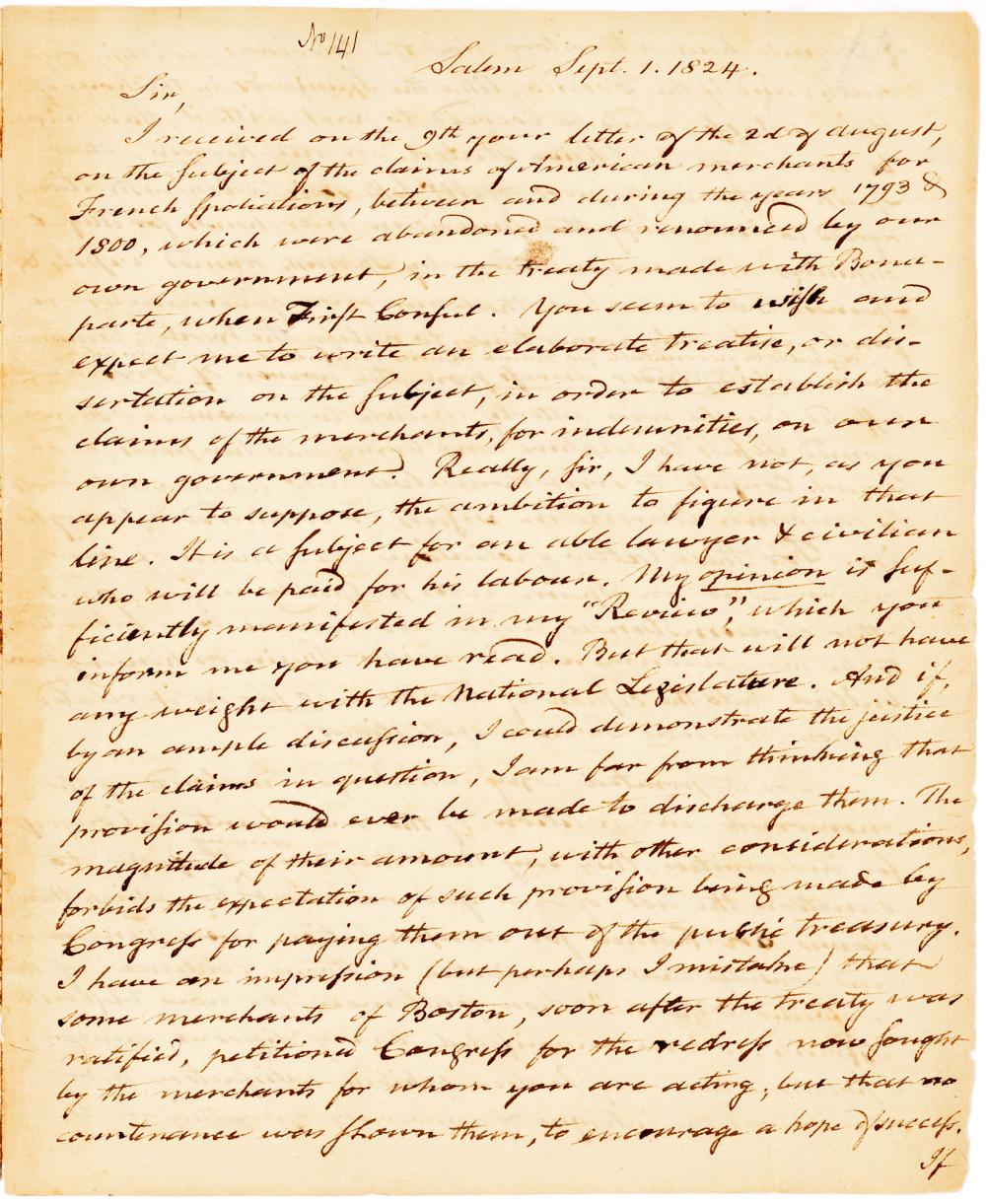 Pickering Turns Down a Lobbyist and Mentions Jefferson, Adams, Napoleon and Postage Fees!

PICKERING, TIMOTHY. (1745-1929). American soldier, founding father and secretary of state for Presidents George Washington and John Adams. ALS. (“Timothy Pickering”). 4pp. 4to. Salem, September 1, 1824. To JAMES CAUSTEN (1788-1874), a War of 1812 naval veteran and Baltimore merchant and attorney who lobbied Congress on behalf of merchants whose ships and cargo were seized by France during the Quasi-War of 1798-1800.

“I received on the 9th your letter of the 2d of August on the Subject of the claims of American merchants for French spoliations between and during the years 1793 & 1800, which were abandoned and renounced by our own government, in the treaty made with Bonaparte, when First Consul. You seem to wish and expect me to write an elaborate treatise, or dissertation on the subject, in order to establish the claims of the merchants, for indemnities, on our own government. Really, sir, I have not as you appear to suppose, the ambition to figure in that line. It is a subject for an able lawyer & civilian who will be paid for his labour. My opinion is sufficiently manifested in my ‘review,’ which you inform me you have read. But that will not have any weight with the National Legislature. And if, by an ample discussion, I could demonstrate the justice of the claims in question, I am far from thinking that provision would ever be made to discharge them. The magnitude of their amount, with other considerations, forbids the expectation of such provision being made by Congress for paying them out of the public treasury. I have an impression (but perhaps I mistake) that some merchants of Boston, soon after the treaty was ratified, petitioned Congress for the redress now sought by the merchants for whom you are acting, but that no countenance was shown them, to encourage a hope of success. If France had a territory, like the Floridas, within our reach; and if the French, like the Spaniards in the hour of their distress, could be coerced to part with it, there might be some hope. I have stated in my Review, that Spain, in the early part of Mr. Jefferson’s administration, agreed to indemnify the American merchants for illegal captures and condemnations by Spanish armed vessels & Spanish tribunals; but that our own government refused, at the only proper times, to ratify the treaty; because Spain refused to be accountable for French injuries committed; in her jurisdiction which she was under duress from the power of France & suffered (as she was utterly unable to prevent it) French armed vessels to capture and bring into her ports, and French Consuls to erect themselves into admiralty courts to condemn American vessels so captured & brought in. For these latter spoliations, the demands of our government on Spain was palpably unjust and under other circumstances, would never have been submitted to by her government. I consider Spain as having been bullied into the cession of Florida, -- so far as it related to those atrocious French spoliations. In the printed copy which you inclosed of the memorial and petition of the merchants to Congress, for indemnities, they say that they were among the first to sanction the act of our government, by which their claims on France for compensation were renounced; and consider that renunciation ‘a strong evidence of its profound wisdom.’ Those gentlemen are now blest with its fruits. I have manifested a very different opinion. I presume that my Review exhibits satisfactory proofs, that is was the intrigue of democracy operating on the inordinate ambition of President Adams, which originated the mission to France in 1799, and caused the nomination of Mr. Murray; and, as that would not take with the Senate, the subsequent nomination of Ellsworth, Davy & Murray, to negotiate a peace & treaty with France. The mischievous effects and consequences of the entire transaction, in regard to the honor and high interests of the United States, are set forth in my Review. The vast losses thence accruing to the American merchants, are those for which they are now seeking redress. If that largest portion of the community which approved of the mission, with their leaders who contrived it, could be compelled to furnish the indemnities in question, it would seem to be just; while those who detested the measure in its origin, and would, if possible, have prevented its execution, ought not, in equity, now to be saddled with the burthen of taxes, to the amount of twenty millions of dollars, to indemnify the sufferers. I know that such a distinction is impossible, in the practical administration of government; but if the numerous merchants who were opposed to the mission, were not also very great and probably the greatest sufferers, the entire failure of success, in the applications to Congress for redress, would not excite any deep commiseration. The enthusiastic admirers of imperial as well as of republican France, might be allowed to enjoy, unenvied, the fruits of their devotion. Sir, you may be well known to others, and entitled to much respect; but to me you are an absolute stranger. I never, before the receipt of your letter, saw, or heard of your name. I stand not on ceremony and desire no special deference; but being such a stranger should you not have obtained an introduction from some gentleman in your city whom I know, & have paid the postage of the packet? While I am, as I always have been, willing to render any reasonable services to my fellow citizens, it is unreasonable that my purse as well as my time should be taxed in rendering them. To these postage taxes, indeed, owing to the avarice or heedlessness of letter writers, I have long been subjected. You inform me that you are the agent of many mercantile suffering claimants; & doubtless you are receiving a full compensation for your agency. Be this as it may, I cannot but consider the tax of fifty cents only, for your letter and its inclosure, for an object in which I have not the shadow of personal interest, as an imposition. I am, Sir, your obedient servant…”

After disbanding the Continental Navy in 1784, American merchant ships were subject to seizure by French vessels seeking payment of unpaid American debts. As a result of their dissatisfaction with the Jay Treaty of 1794, the French no longer held to the terms of the Franco-American Commercial Treaty of 1778 which protected American shipping from French privateers. The practice escalated into an undeclared “Quasi-War” under President John Adams (1735-1826), and in 1798 Congress responded by establishing the Department of the Navy and the United States Marine Corps. Adams continued to pursue diplomatic means to end the conflict with France and Napoleon (1769-1821). However, the dispute was not formally resolved until the negotiations begun in 1799 by Adams’ envoys William Vans Murray (1760-1803), a Maryland congressman and ambassador; Oliver Ellsworth (1745-1807), future supreme court chief justice; and founding father and North Carolina governor William Richardson Davie (1756-1820) culminated in the Convention of Paris of 1800, the “treaty made with Bonaparte” of our letter. By recognizing American naval rights, the agreement helped free the young nation from any lingering allegiance to France that had been forged during the American Revolution. The Convention left the issue of payment for French spoliation unresolved, with Congress agreeing to compensate its own citizens $20 million.

“Though America assumed responsibility for its citizen’s claims, the process of compensation for these so-called French Spoliation claims was anything but swift. James H. Causten [our letter’s recipient], a Baltimore lawyer, not only fought for decades for his own compensation, but diligently served as an agent for the French spoliation claims. In 1874, shortly before his death, he compiled a list of 1,815 French captures, ‘vessels and cargoes (generally laden with breadstuffs and provisions) of light tonnage adjusted for duplication to 1,700, estimated at $9,000 each.’ Five thousand petitions rested in Congress’s files, their authors and families, he wrote, ‘praying for relief’ for seventy-one years,” (“The Quasi-War (1798-1801): Diplomatic Treasures from a Long Forgotten Dispute,” Maryland Historical Society Underbelly Blog). In fact, hardly any issue has come before Congress more often than that of French spoliation, claims for which persisted (through the original claimants’ heirs) into the 20th century.

Commissioned adjutant general in the Continental army by George Washington in 1777, Pickering helped settle the Pennsylvania city of Wilkes-Barre before Washington appointed him Postmaster General in 1791 and Secretary of War four years later; within eleven months he became Washington’s Secretary of State, in which capacity he was directly involved in negotiations related to French spoliation claims. He continued to hold this position under President Adams but was dismissed from his post in 1800 for opposing peace with France. Thereafter, Pickering represented Massachusetts in Congress, becoming an increasingly radical Federalist in his later years, supporting the plot for New England to secede over grievances related to the War of 1812. He left public life in 1817, retiring to his native Salem, whence he penned our letter.

In 1823, John Adams’ private letters to his cousin, William Cunningham, Jr., a journalist and lawyer, filled with Adams’ unguarded, critical remarks about Thomas Jefferson (1743-1826), who considered Adams a friend, and Alexander Hamilton, by then deceased, were published in an effort to damage the presidential aspirations of John Quincy Adams; Cunningham’s son, was a supporter of Adams’ challenger Andrew Jackson, and published the letters shortly after his father’s suicide. The contents of the letters prompted Pickering to publish A Review of the Correspondence between the Honorable John Adams, Late President of the United States, and the Late William Cunningham in 1824.

In our letter, Pickering discusses French control of Spain and, by extension, Spanish Florida, which Jefferson secretly tried to annex in 1805-1806 by asserting pressure on France. Florida did become part of the United States in 1819 with the Adams-Onis Treaty that ceded the territory to the U.S. in exchange for $5 million in claims against the Spanish government dating back to the Quasi-War.

Our letter records Pickering’s lingering disagreement with the international policy of John Adams as well as Causten’s ongoing pursuit of French spoliation claims.

General wear, but in overall fine condition. With the original address leaf. [indexhistory]