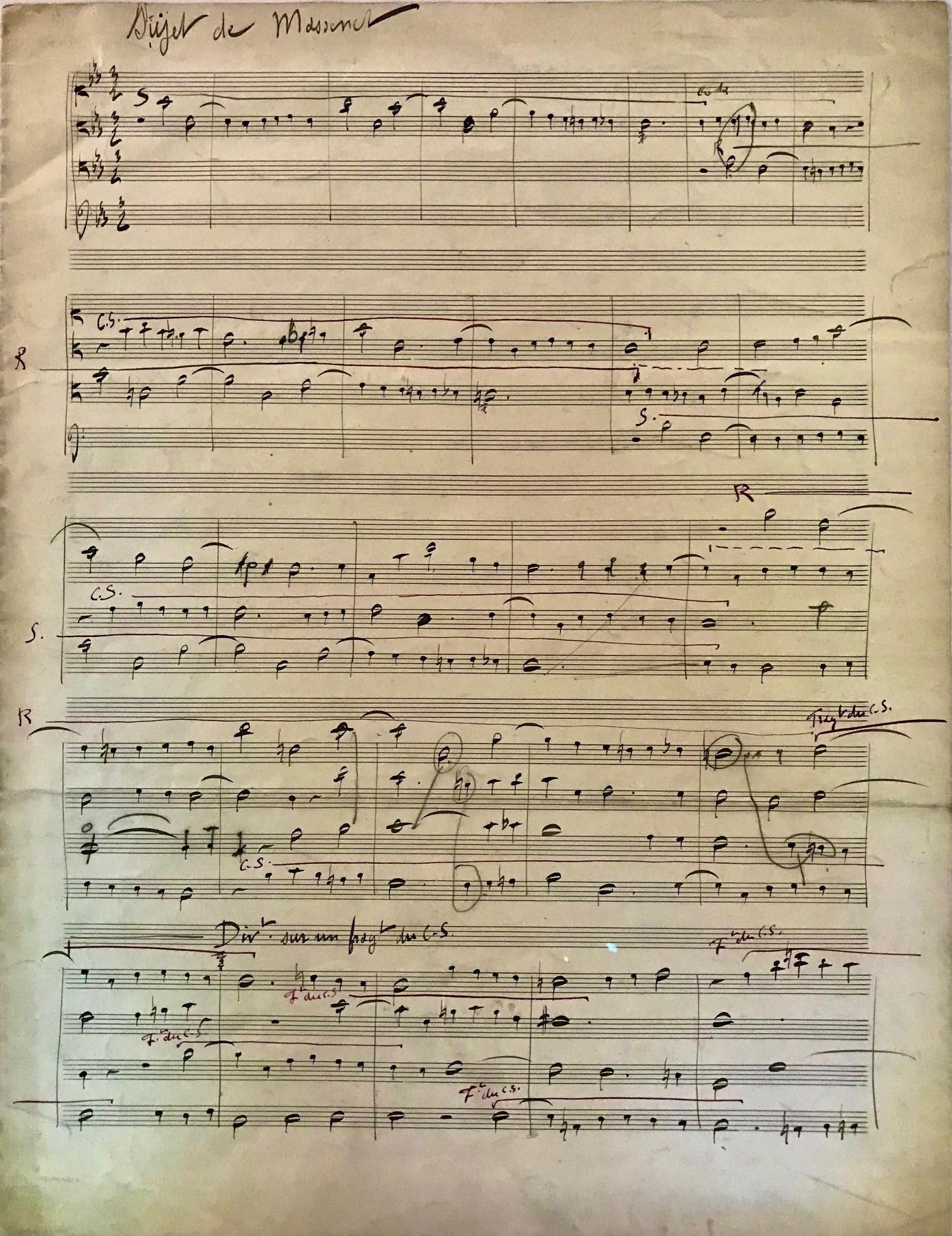 Ravel Autograph Musical Ms. on a “Subject” by Massenet & a Minor Thought on Beethoven 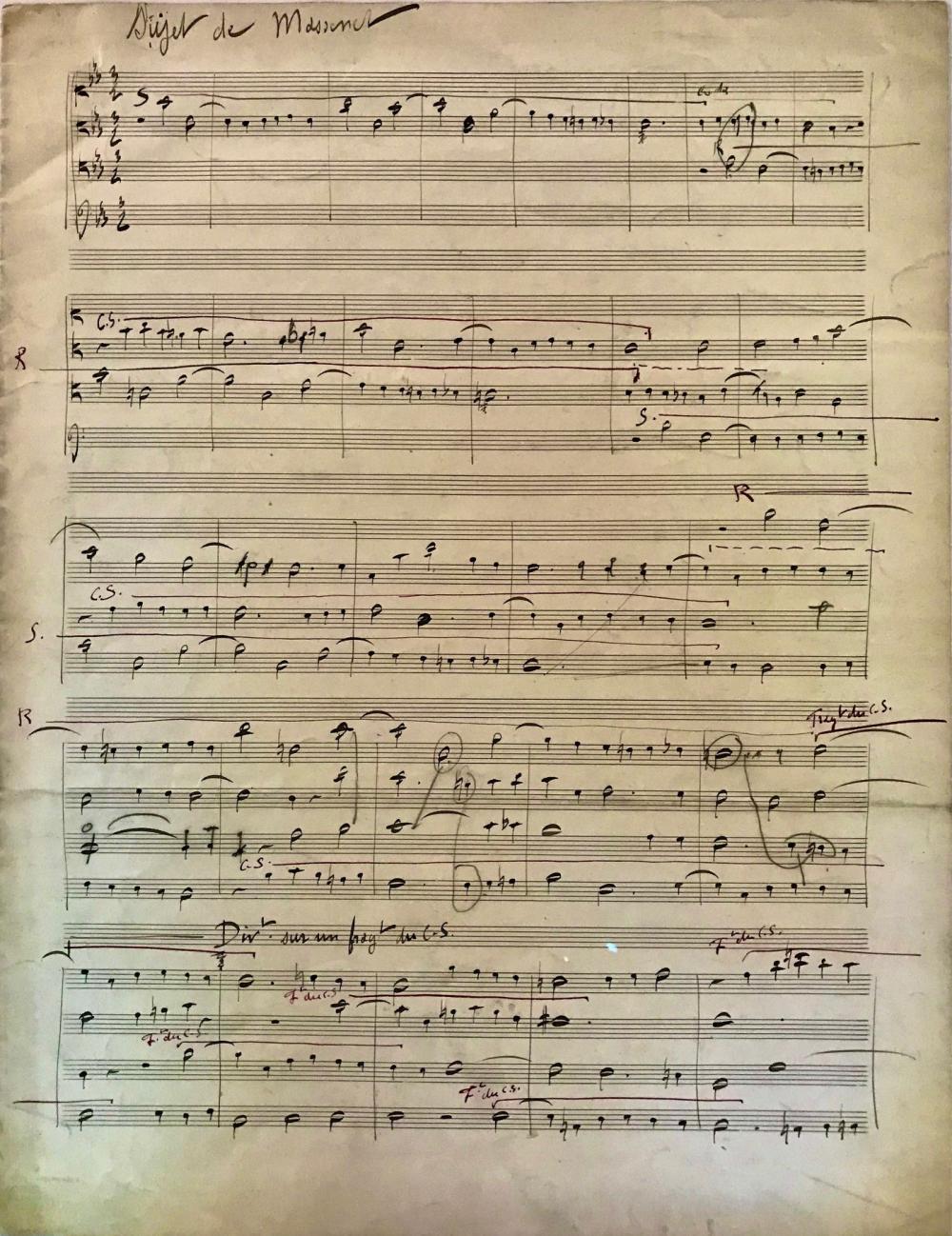 Ravel Autograph Musical Ms. on a “Subject” by Massenet & a Minor Thought on Beethoven

RAVEL, MAURICE. (1875-1937). French composer; creator of masterpieces such as Daphnis et Chloe, Gaspard de la nuit and Bolero. AMusMs. (Unsigned). 3 1/3pp. Folio. N.p. [Paris], N.d. An incomplete fugue in E flat major in four parts inspired (as noted in Ravel’s hand) by a “subject” of the French composer JULES MASSENET (1842-1912). A total of 89 bars, written as part of Ravel’s studies at the Paris Conservatoire, in black ink on 24-line music paper with indications in red ink marking the various repetitions of the subject and counter-subject. The manuscript includes a subject, response, counter-subject, three divertissements, and, as Ravel notes, a “1st Strette (simultaneous S. and C.S.)”

Although Ravel’s artistic achievements at the conservatory were notable, so were his academic failures. “When it came to satisfying the authorities of his abilities in fugue writing he failed abysmally. In 1900 he again found himself excluded from the Conservatoire’s rolls,” when he was expelled from Gabriel Fauré’s composition class, (The New Grove Dictionary). Many of his exercises in fugues were in preparation for his submissions to win the Prix de Rome (where Massenet was a judge in the 1901 competition). “Ravel had also ‘been through the mill’ [like Debussy] with regard to academic discipline, and his fugues as well as his harmony exercises were notated in open score, utilizing four different clefs. He believed this type of rigorous academic training to be indispensable, for it assisted the composer in mastering his craft,” (Ravel, Man and Musician, Orenstein). “Although he continued to attend Fauré’s class as an ‘auditeur’, his main official connection with the Conservatoire consisted in his several attempts to obtain the Prix de Rome for composition,” and by January 1903 Ravel had submitted the first movement of his String Quartet where it failed to win,” (The New Grove Dictionary). After leaving school he completed the quartet and dedicated it to Fauré who had consistently supported his artistic development.

One of the most prolific and important French opera composers of his time, Massenet's influence on turn-of-the-century French music was profound. Not only did his many operas bridge the transition from a traditional to a more modern style, but his teaching at the Paris Conservatory from 1878 on shaped the work of nearly every major French composer of his era. His numerous works for voice, piano, orchestra, and chorus – now largely forgotten – have been eclipsed by the success of his operas Manon, Werther, Thais, and Sapho.

At the bottom of the manuscript’s final page, Ravel has scratched out a nine-note beginning of an exercise he entitled “Sur la forme de la 8me Symp. de Beethoven” (“On the form of Beethoven’s 8th Symp.”). Some creasing, dust staining and light wear. In fine condition – manuscripts of Ravel have become increasingly scarce. [indexMusic]