Back to catalog
Lot 43 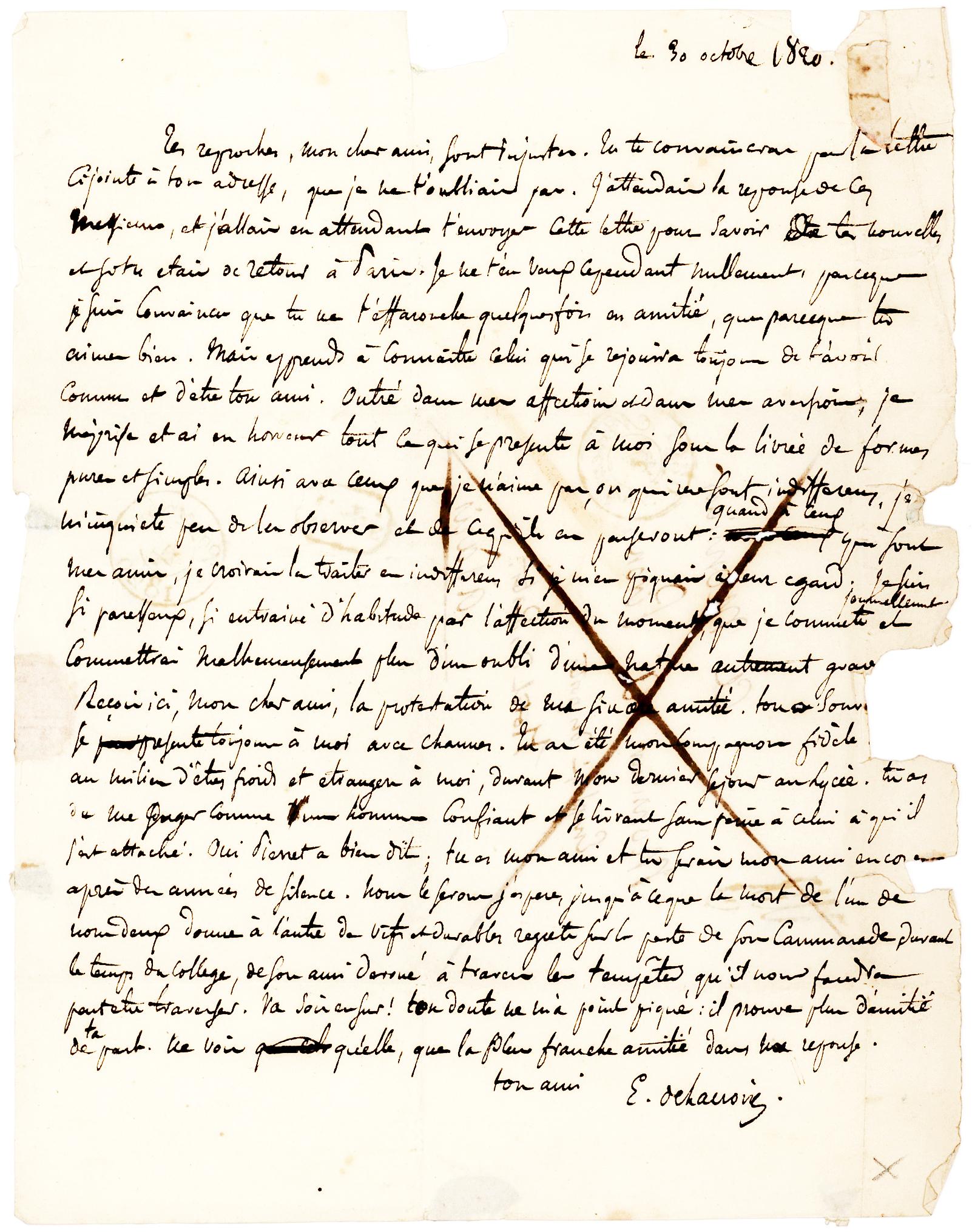 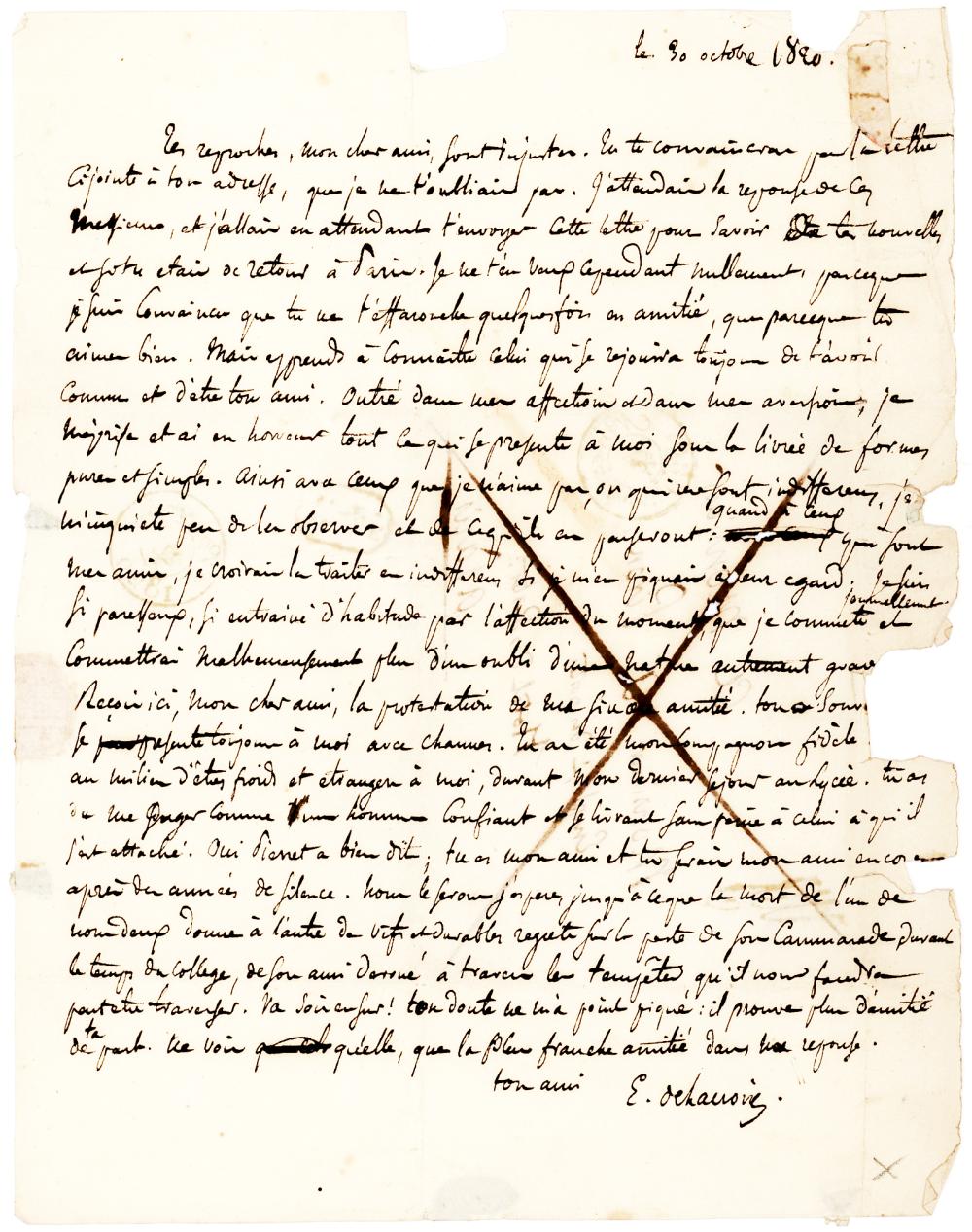 DELACROIX, EUGENE. (1798-1863). France’s greatest painter of the Romantic period; precursor of both Impressionism and Post-Impressionism. ALS. (“E. Delacroix”). 1p. 4to. N.p., October 30, 1820. An emotional letter, written at the age of 22, to his close friend and future executor, Achille Piron (1798-1865). In French with translation. With an unsigned, original carte-de-visite photograph of Delacroix by the Paris atelier of G.M. Lege.

“Your reproaches, my dear friend, are unjust. You will convince yourself by the attached letter addressed to you, that I had not forgotten you. I was waiting for the answer of these gentlemen, and meanwhile while waiting, I was going to send you this letter to have news from you and know whether you were back in Paris. I am not angry with you, however, because I am convinced that you sometimes become alarmed in friendships, only because you have strong feelings of friendship. But learn to know the one who will always rejoice in having met you and in being your friend. Exaggerated in my affection and in my aversion, I despise and abhor all that comes before me with the aspect of pure and simple forms. So, with those whom I do not like, or who are indifferent to me, I hardly care to observe them and of what they will think of it: as to those who are my friends, I think I would be treating them with indifference if I took offence concerning them. Finally, I am so lazy, so usually carried away by the affection of the moment, that I commit and will unfortunately commit more than one forgetfulness of an otherwise grave nature.

Receive here, my dear friend, the protest of my sincere friendship. Your memory always presents itself to me with charm. You were my faithful companion amid cold beings and strangers, during my last stay at the lycée. You have known how to forge me as a confident man and confiding without difficulty to the one to whom he has attached himself. Yes, Pierret, is right: you are my friend, and you will still be my friend after years of silence. We will be, I hope, until the death of one of us gives to the other lively and lasting regrets for the loss of his comrade, during the time of college, of his devoted friend through the storms that we may have to cross. Go be confident! Your doubt has not irritated me: it proves more friendship on your side. See only, in my answer, the frankest friendship…”

Delacroix received a classical education at Paris’ Lycée Imperiale, referenced in our letter. It was during this time that he also became enamored of music and theater, and began his studies with the well-known academic painter, Baron Pierre-Narcisse Guerin. By the mid-1820s, Delacroix was already regarded as a master; indeed, “the uninhibited expression of energy and movement...his fascination with violence, destruction, and the more tragic aspects of life; and the sensuous virtuosity of his colouring have helped make him one of the most fascinating and complex artistic figures of the 19th century,” (Encyclopaedia Britannica).

Delacroix and Piron entered the Lycée at the same time and became lifelong friends. Piron pursued a career in the postal service, as noted on the address leaf of our letter, as his father was deputy-director of the central postal administration. In 1838, Piron published Des services des Postes et de la taxation des lettres au moyen d’un timbre, proposing the use of postage stamps, a method which was adopted 11 years later. Piron owned several of Delacroix’s paintings and acted as his executor and published a biography Eugène Delacroix, sa vie et ses œuvres. Our letter mentions their fellow school friend, artist Jean-Baptiste Pierret (1795-1854).

A large X drawn on the address leaf on the verso has bled through. Some damage and paper loss at the edges affects several words. In good condition and very rare from this early period in Delacroix’s life.