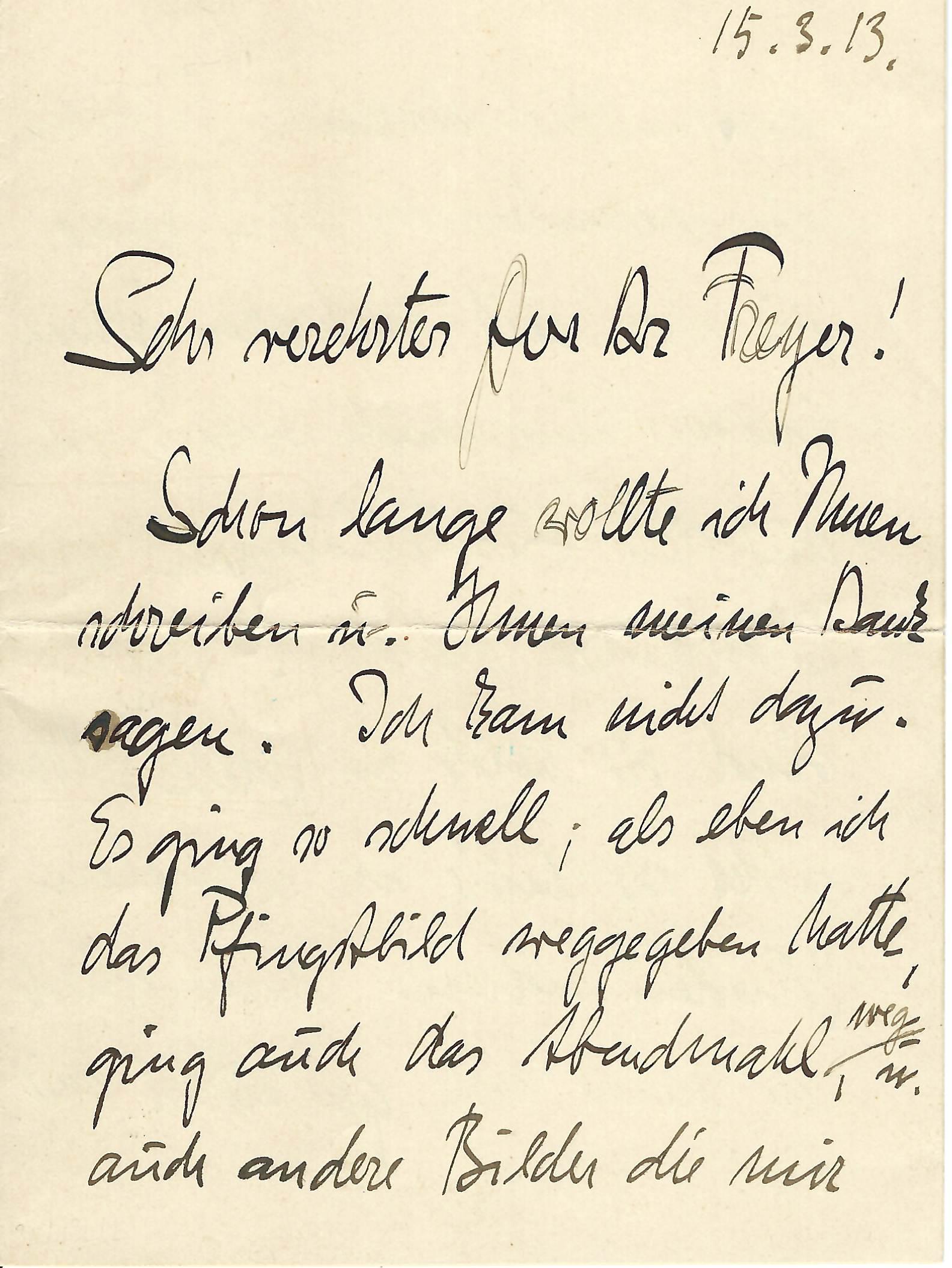 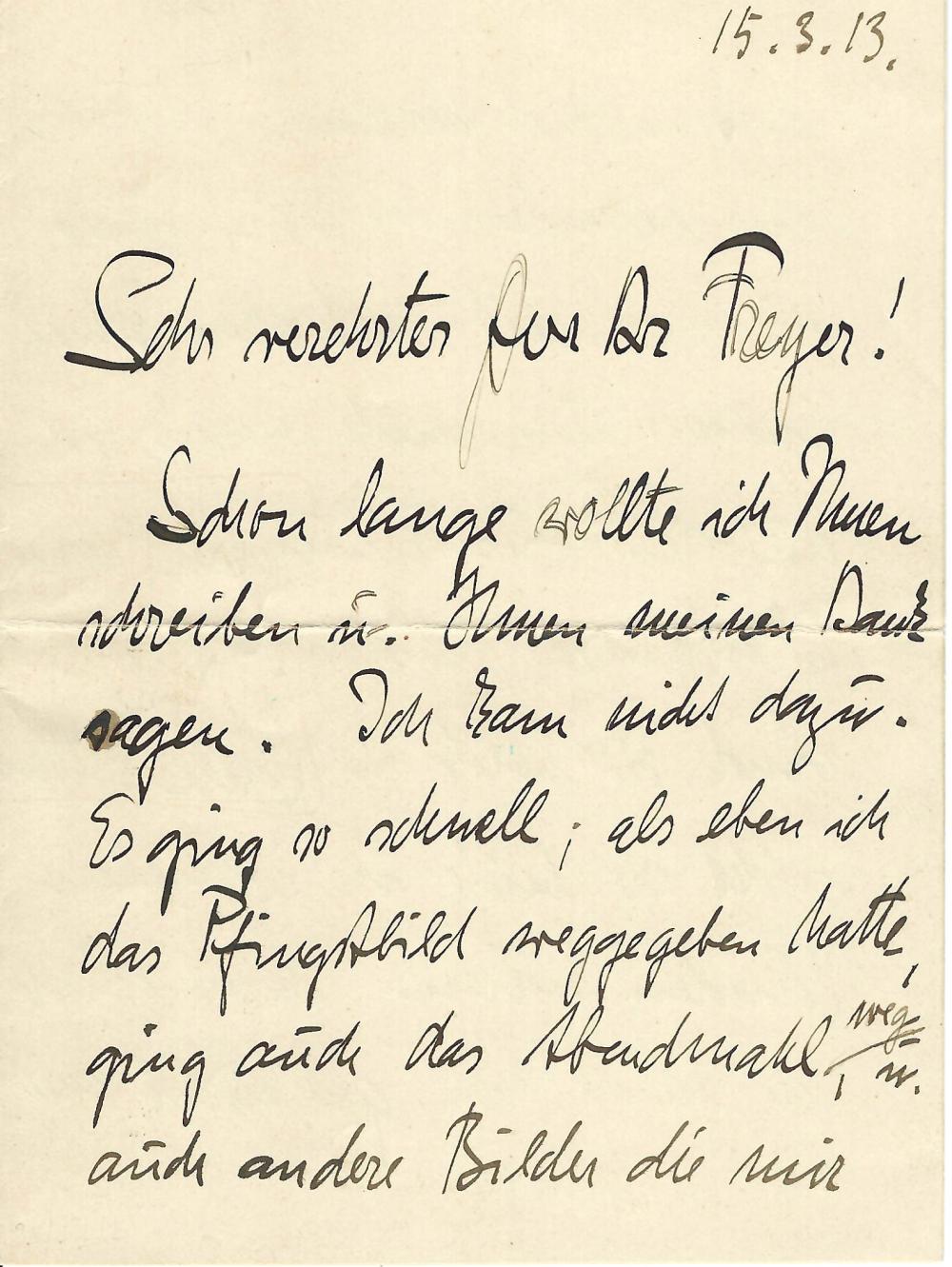 “I have wanted to write to you for a long time and to thank you. I did not get there. It happened so quickly; as I had just given away the picture of Pentecost, the Sacrament also went away, as did other pictures that were valuable and dear to me.

But it was especially the first two that had been around me for several years or that were a focus of the exhibitions. Now they are both in Halle.

If the two of them were not in such loving hands, then I probably would not be able to accept the thought that they are no longer the ones.

They bought the heavy sheet with the mood of death.

The events in Halle were all so surprising.

Nolde worked as a woodcarver, illustrator and drawing instructor before moving to Berlin and devoting himself completely to establishing his name as a professional artist. In 1906, he was invited to join the artistic group Die Brücke, after which he became affiliated with the Berlin Secession. By 1912, when he exhibited with Der Blaue Reiter, he had become famous as an important expressionist painter.

Following a serious illness in 1909, Nolde turned to biblical subjects, and, over the next four years, completed nearly 50 paintings with religious themes, including The Last Supper (possibly the “Sacrament” painting of our letter), shortly after which he painted Pentecost. Both paintings were raw with emotion and heralded Nolde’s abandonment of impressionism and the development of “the dramatic, new expressionistic style for which he is well known,” (“Emil Nolde’s Biblical Paintings of 1909,” Zeitschrift für Kunstgeschichte, Sieger). These works are also significant for reintroducing religious subject matter into European art. Between 1912 and 1913, The Last Supper and Pentecost, which Nolde believed were his “most spiritually potent images,” were acquired by the Städtisches Museum Moritzburg in Halle, over the objections of William von Boden, a Berlin curator of Old Masters, possibly the surprising “events in Halle” to which our letter refers, (ibid.).

At the time of our letter, Dr. Freyer was at the museum in Halle working as an assistant to Max Sauerlandt, a well-respected proponent of modern German art.

After the Nazis came to power, Nolde’s work was deemed degenerate and, in 1937, The Last Supper and Pentecost were confiscated from the museum in Halle and included in the famous 1937 exhibition of “Degenerate Art” in Munich. In fact, the Nazis included more of Nolde’s work in the exhibition and confiscated more of his artworks from museums – 1,052 in total – than any other artist during their purge. In 1941, Nolde was forbidden to paint entirely, even in the privacy of his own home, but, in opposition, he quietly painted hundreds of watercolors of flowers, which he dubbed “Unpainted Pictures.”

Nolde’s persecution at the hands of the Nazis was ironic given his support of the regime and his own anti-Semitic belief that his career had been stymied by Jews. “In another time and place, this obsession might have remained a private affair, known only to a few intimates, but Nolde had the moral bad luck to be a contemporary of the Nazis, of whom he became an early and avid supporter… But with the final verdict in the hands of Hitler, a failed painter who couldn’t bear Expressionism, it was a foregone conclusion that for all Nolde’s efforts to curry favor with the regime—and they were as assiduous as they were sincere—things would go against him… While he had cast himself as the victim of a boycott by the Jewish-dominated Berlin art world, it was the Nazis who in fact ostracized him, and yet in their case, he seems never to have given up hope until the end. Even after that, he saw the German catastrophe only in terms of his art career,” (“The Perfect Victim: How Should We Remember the Art of Emil Nolde?,” The Nation, Schwabsky). Because of his prolific output and his support of yet condemnation by the Nazis, Nolde’s complicated legacy remains the subject of modern scholarship.