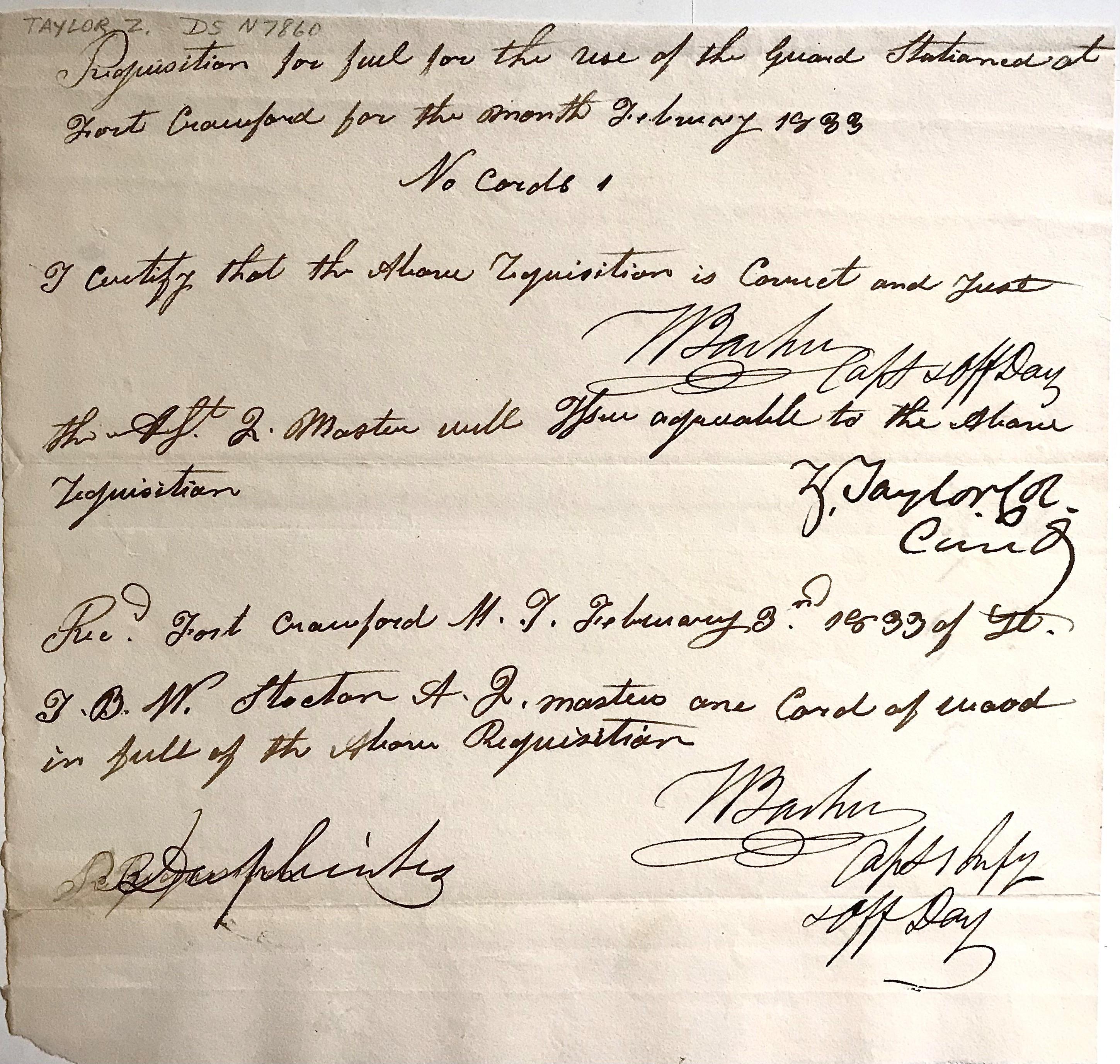 TAYLOR, ZACHARY. (1784-1850). Career soldier and 12th president of the United States; nicknamed “Old Rough and Ready” during the Battle of Okeechobee. Manuscript DS. (“Z. Taylor Col Cmdg”). 1p. Oblong 8vo. Fort Crawford [Prairie du Chien, Wisconsin], February 1, 1833. Authorizing the adjutant quartermaster to provide one cord of wood requisitioned on behalf of the guard at Fort Crawford. The handwritten requisition has the request at the top, signed by Captain Thomas Barker, Taylor’s authorization in the middle and a signed attestation of the receipt of the wood at the bottom, also signed by Barker.

Taylor joined the U.S. Army as a first lieutenant earning a rank of captain in the War of 1812. Thereafter, he commanded several garrisons and established a new fort in Louisiana before he was called to Michigan Territory where he oversaw the 1828 reconstruction of the dilapidated Fort Crawford in modern Prairie du Chien, Wisconsin. He was promoted to colonel and given command of an infantry regiment at the outbreak of the Black Hawk War on April 6, 1832. The conflict involved Sauks, Meskwakis and Kickapoos, formerly allied with the British and led by Black Hawk, in a quest to take back land ceded to the United States with the 1804 Treaty of St. Louis. Black Hawk surrendered to Taylor at Fort Crawford after the Battle of Bad Axe and was imprisoned there until Taylor’s underling, Lieutenant Jefferson Davis, transported him to St. Louis. It was at Fort Crawford that Davis, future president of the Confederacy, courted Taylor’s daughter despite her father’s disapproval and eloped with her in 1835 only to see her die three months later from malaria.

After the end of the Black Hawk War, Taylor made a name for himself in the Second Seminole War, for his victory at the Battle of Okeechobee, where he earned the moniker “Old Rough and Ready.” After fighting in the Mexican-American War, Taylor was elected president in 1848, but his term was cut short when he died of flu after only 16 months in office.

Folded, trimmed and with some irregular edges. In very good condition. [indexhistory]