Back to catalog
Lot 88 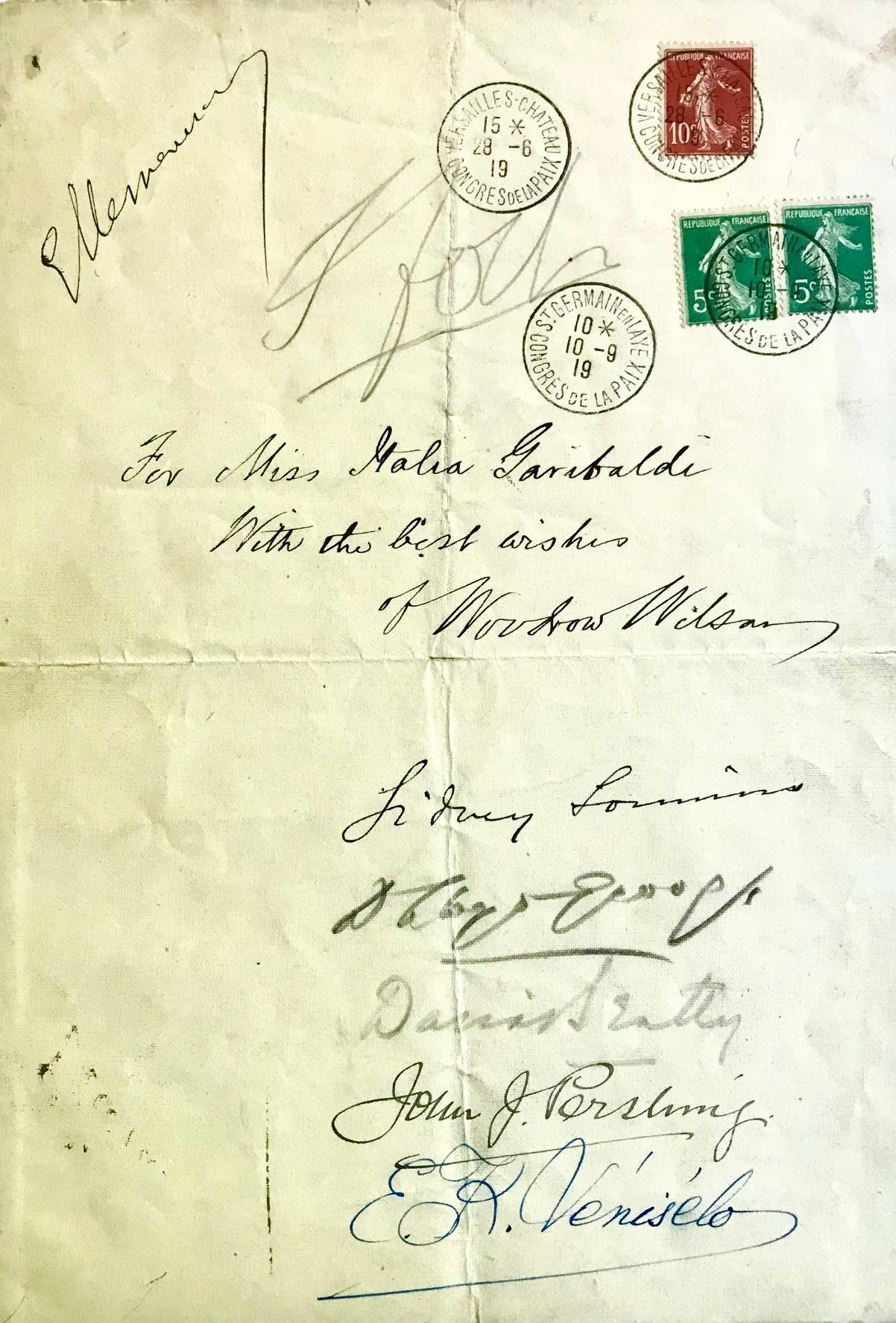 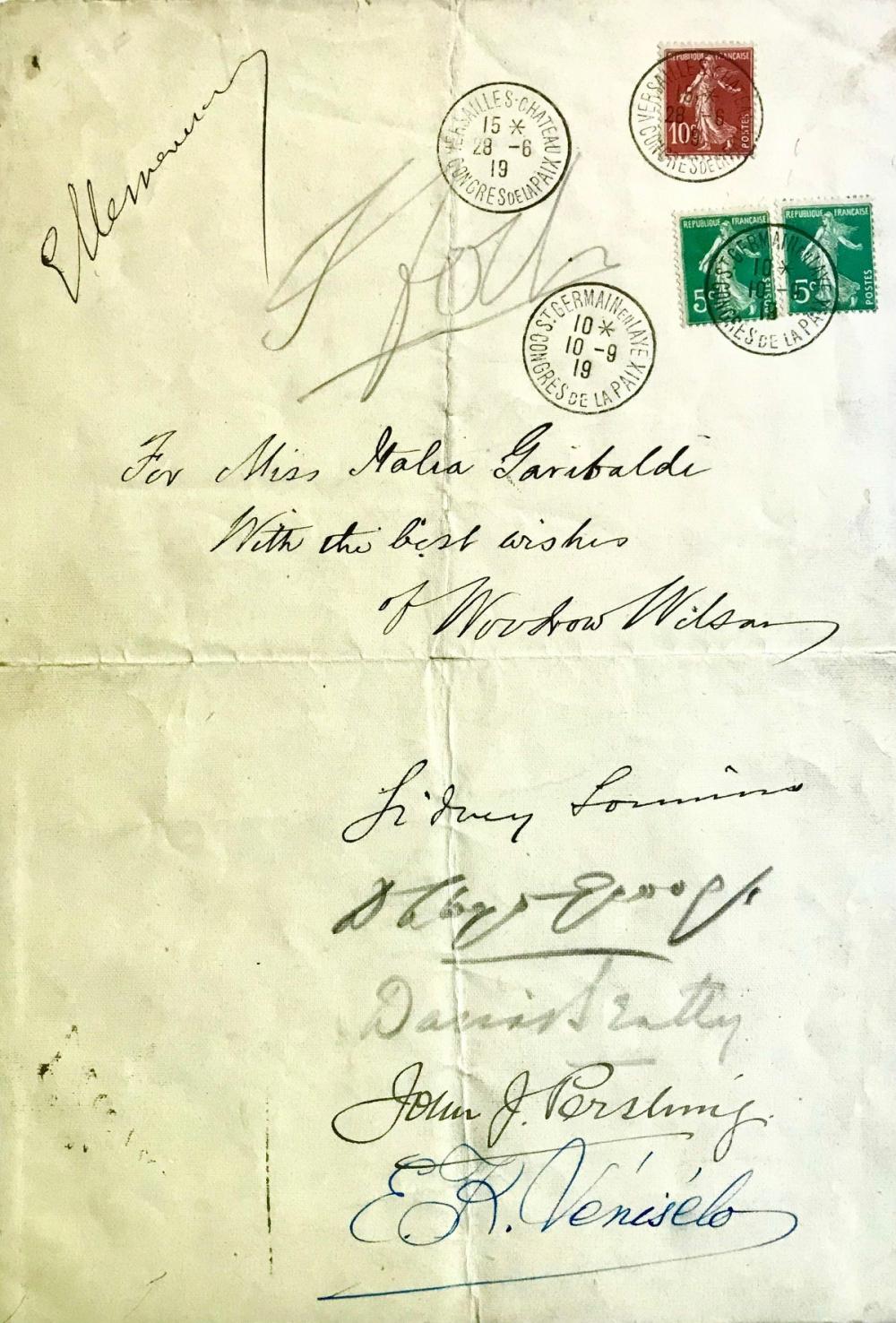 This remarkable relic connecting the two major peace treaties that ended World War I was autographed by several prominent signatories for Anita Italia Garibaldi (1878-1962), the granddaughter of Italian patriot Giuseppe Garibaldi. It is signed as follows, starting at the top of the sheet:

This historic assemblage of signatures is accompanied by a one-page, 4to., ALS from Italia Anita Garibaldi, written from Rome on May 9, 1921, in which she states:

“I can certify to the authenticity of the group of signatures, having personal acquaintance with the signers and having myself obtained these signatures.

The postmarks are the ones of the famous dates of the German and Austrian peace signing, at Versailles and at Saint-Germaine-en-Laye.

The writer was attached to the Italian Delegation to the Peace Conference in Paris in the capacity of Interpreter of English and American newspapers for S. E. Orlando Italian Prime Minister.

French statesman, Georges Clemenceau, a politician and newspaper publisher, actively defended Captain Alfred Dreyfus, the French-Jewish officer unjustly convicted of treason. In 1898, as owner and editor of the newspaper L’Aurore he published Emile Zola’s J’Accuse!, the world-famous open letter to President Faure about the Dreyfus Affair. After serving as minister of the interior, Clemenceau became Prime Minister in 1906, a position he held until 1909 and again from 1917 until 1920. His return to power came during the darkest days of World War I and helped turn the tide for an allied victory; he was a key figure in the peace negotiations held in France.

A veteran of the Franco Prussian War, Ferdinand Foch rose through the ranks of both the French military and the École de Guerre where he was an instructor. In 1914, he checked the invading German troops as they gained ground toward Calais. A brilliant tactician, Foch was largely responsible for Joffre’s important victory at the Marne and in 1918 he was placed in command of the allied armies on the Western front. His strategic attacks led to the withdrawal of German forces and the subsequent November 11, 1918 armistice that ended the war. Foch’s participation was important in both armistice negotiations and the Paris Peace Conference. For his services he was made Marshal of France.

From January 7 to February 14 and March 14 to June 18, 1919, President Woodrow Wilson participated in the Paris Peace Conference, at which the Allied victors of World War I established the terms of peace for the defeated Central Powers. In so doing, Wilson became the first American president to travel to Europe while in office. After six months of arduous negotiating between the delegates of 27 nations, the Treaty of Versailles was signed on June 28, 1919, and ratified on October 21, 1919. Prior to its signing, separate treaties were negotiated between individual countries. On September 10, 1919, the Treaty of Saint-Germain-en-Laye dissolved the Austro-Hungarian Empire and established the new Republic of Austria from the German speaking portions of the defeated empire, resulting in a loss of territory which was detrimental to the newly established country’s economic health. After all the negotiations were concluded, the Paris Peace Conference closed with the inaugural General Assembly of the League of Nations on January 21, 1920. The League was the first international organization devoted to maintaining peace through disarmament, negotiation and arbitration, enduring for 26 years, until the establishment of the United Nations. For his efforts to establish a lasting peace, Wilson won the 1919 Nobel Peace Prize.

An experienced diplomat, Sidney Sonnino served in the Italian Chamber of Deputies from 1880-1919, becoming minister of finance and minister of the treasury in 1893. He twice served as prime minister during 1906 and again from 1909-1910. During World War I, Sonnino drew on his considerable diplomatic experience and fluency in foreign languages as foreign minister, in which capacity he participated in the Paris Peace Conference. Nicknamed the “silent statesman of Italy,” Sonnino is remembered for his integrity in international affairs and his attempts to alleviate poverty in Southern Italy.

David Lloyd George served in the House of Commons and as chancellor of the exchequer, introducing unemployment and health benefits with his National Insurance Act of 1911, part of the Liberal Government’s influential social welfare reforms. During World War I, he served as minister of munitions, war minister and, from 1916-1922, prime minister. As such, he was one of the central figures at the 1919 Paris Peace Conference.

David Beatty joined the Royal Navy at an early age, rising through its ranks while becoming close to the court of Queen Victoria through her son Alfred, Duke of Edinburgh. But it was during the Mahdist War in Sudan that he made his reputation. Beatty was later wounded during the Boxer Rebellion in China. By 1906 he was aide-de-camp to King Edward VII with a rank of rear admiral. During World War I, he led the Battle Cruiser Fleet in its domination of the North Sea, most notably at the Battle of Jutland, where he famously stated, “There seems to be something wrong with our bloody ships today,” after two were blown up in quick succession. In 1919, he was made admiral of the fleet and created 1st Earl Beatty; later that year, he was appointed first sea lord.

General John J. Pershing’s leadership during World War I earned him the title “general of the armies,” a rank bestowed (posthumously) only upon George Washington, making Pershing the only officer to receive the title during his lifetime. Pershing’s American army arrived in France in 1917, famously fighting in the Meuse-Argonne Offensive, and making him the most celebrated American military leader of the conflict. In November 1918, Pershing abandoned protocol and urged President Wilson to reject an armistice with the Germans, believing that the Allies could persuade Germany to agree to an unconditional surrender.

After playing an important role in the foundation of an autonomous Cretan state, Eleftherios Venizelos became a leader in the Greek national liberation movement. His election as prime minister in 1910 began a decades-long tenure, during which he reorganized the government and military, leading the country through the Balkan Wars and World War I, in which Greece sided with the Allies.

Anita Garibaldi’s father was Italian soldier Ricciotti Garibaldi (1846-1924), fourth son of Garibaldi, named for executed Italian patriot Nicola Ricciotti. He fought on the battlefield with his father during the Third Italian War of Independence as well as during the Franco-Prussian War and Turkish-Greek War. Four of Ricciotti’s sons fought in World War I, two of them perishing in the Argonne offensives. Anita’s letter also identifies herself as the sister of Giuseppe Garibaldi II, known by the nickname “Peppino” (1879-1950). Peppino fought with his father in the Greco-Turkish War of 1897 and in various South American conflicts, the Boer War, Mexican Revolution, First Balkan War and, during World War I, he fought for both the French and Italian armies. He later opposed Mussolini and immigrated to the United States. Prior to WWI, Anita was prominent in the Italian labor and women’s movement, lectured in the U.S. and volunteered as a Red Cross nurse. Our letter notes that she was present during the peace process in France, acting as an interpreter.

Our autograph sheet is described as up for auction in the January 18, 1922, Boston Transcript feature “The Bibliographer,” where it is also noted that a similar item sold for the astonishing amount of $3000 in 1918.

Folded into quarters, creased and with some light wear. The signatures of Foch, Lloyd-George and Beatty are pencil. Contained in a luxurious leather slipcase with the gold embossed title “Autographs of the Allied Leaders in the World War – Versailles and St. Germain – 1919.” In very good condition – unusual and rare. [indexhistory]