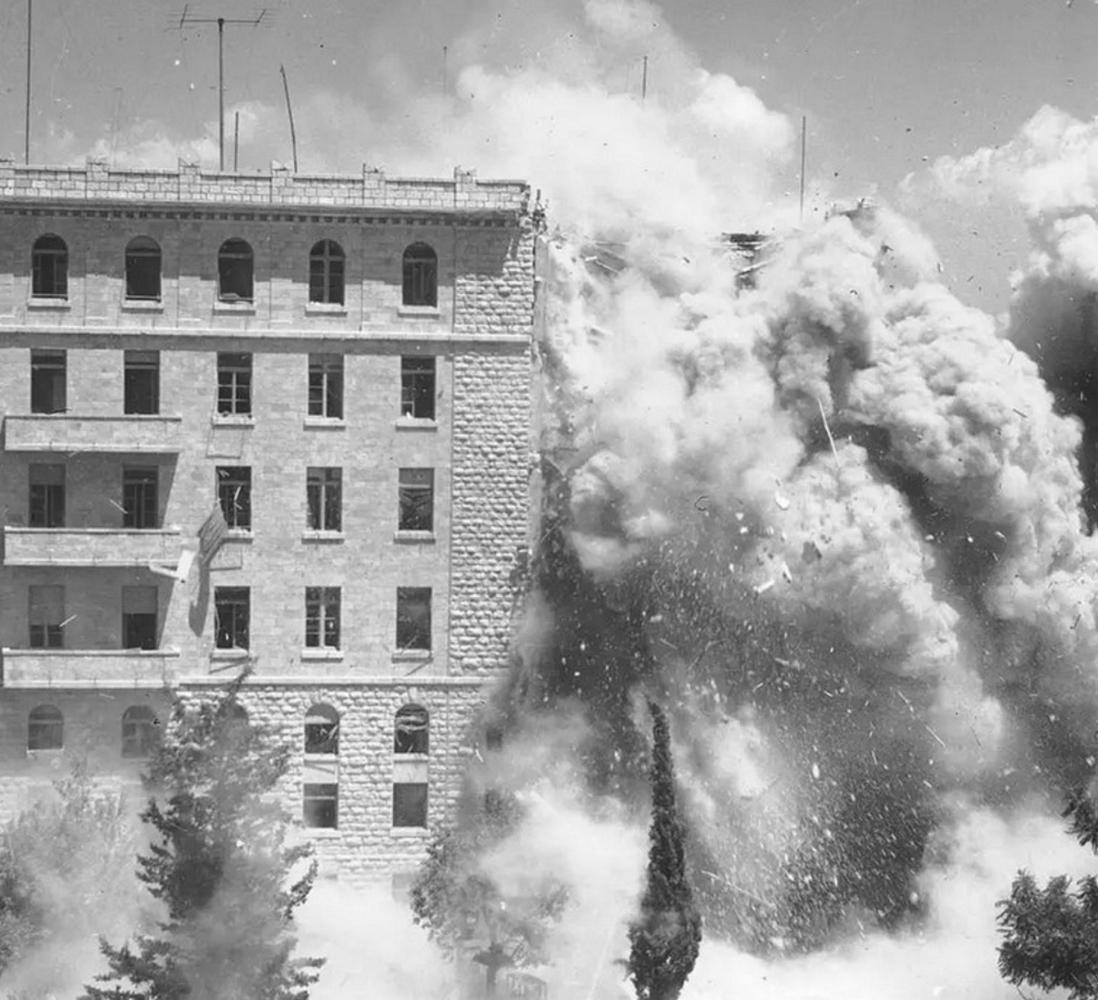 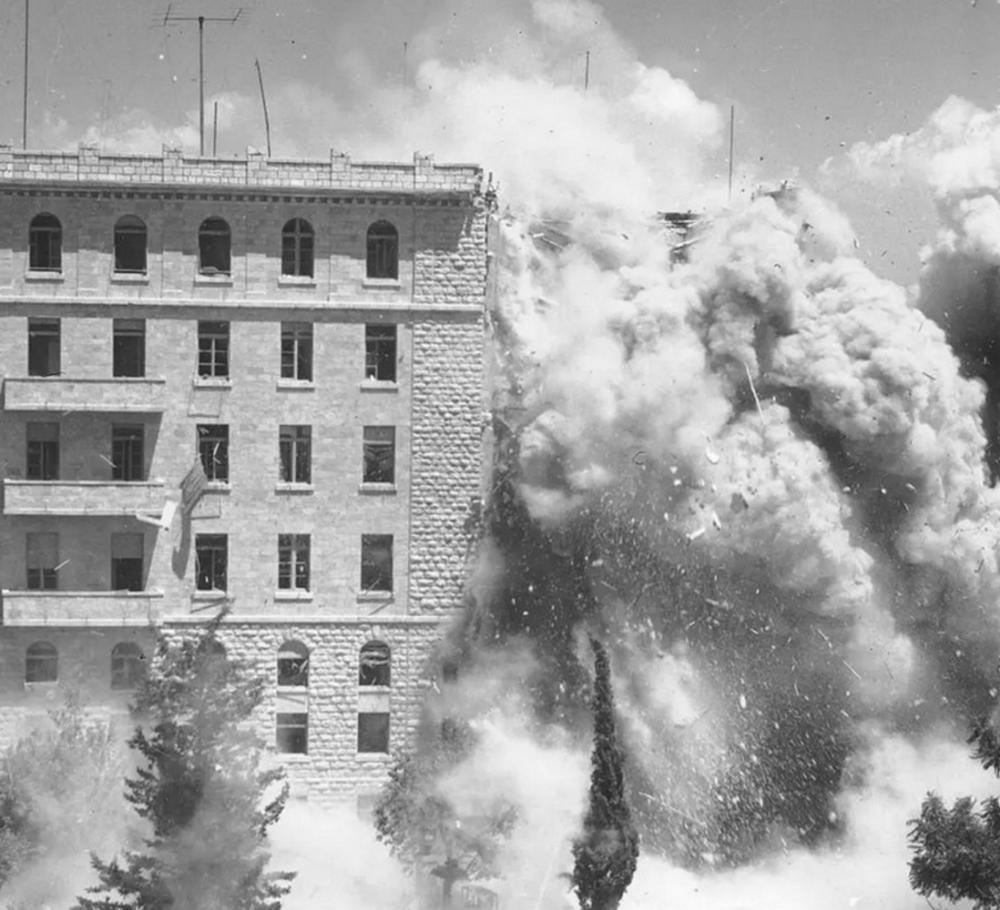 NISSAN, ADINA-HAY. (?-?). A member of the paramilitary group Irgun who, as a 16-year-old courier, was instructed to make several phone calls to warn the King David Hotel prior to the group’s deadly terrorist bombing in 1946. ALS. (“Adina”). 1p. 4to. Nahariya, Israel, February 17, 1987. On her personal stationery to American autograph collector Robert J. Cohen.

“In reply to your letter of Nov. 28, 1986, I am sending you back the four envelopes [not included] duly autographed as requested.

I find this is a great honor for me to be included in your collection of so many famous and honorable personalities and I thank you very much.

I tried to locate the addresses of the fellow members you need, but to my regret I was unable to do so. Israel Levy was the commander of the action, but Gal was killed in the 1948 war.

Do please forgive me for not being of help. I have asked a friend who lives in Tel-Aviv to locate any address she can & I shall write to you as soon as I receive some…”

Palestine had been part of the Ottoman Empire since the 15th century but, in December 1917 the British captured Jerusalem during the Sinai and Palestine Campaign, conquering northern Palestine the following year. After the war and a period of military occupation, the League of Nations established the British Mandate for Palestine in 1923. However, Zionist paramilitary groups such as Palmach, Haganah, and Irgun Zvai Leumi opposed British control of Palestine. Irgun assisted the smuggling of European Jews into Palestine and attacked Arab villages during the 1936-1939 Arab Revolt. But after the release of the White Paper of 1939, in which the British authorities laid out the establishment of a Jewish state in Palestine as well as limits on Jewish immigration and the ownership of property, Irgun began to agitate against the British and sabotage the territory’s infrastructure. After a brief cessation of hostilities because of World War II, the Irgun announced a revolt against the British government in 1944 and conducted further attacks on oil pipelines, telephone lines, railroad bridges, immigrations offices, and other targets.

In June 1946, the British authorities began “Operation Agatha,” a series of raids, in which they searched for arms, subversive plans and arrested paramilitary leaders, including future Israeli Prime Minister Moshe Sharett. The intelligence gathered from the raids was taken to the British offices in Jerusalem’s King David Hotel, prompting Irgun, led by future Prime Minister Menachem Begin, to devise a plan to destroy the wing of the hotel where the incriminating evidence was stored. On July 22, 1946, members of Irgun, disguised as workers, planted milk cans filled with explosives in the basement of the hotel. Adina Hay (alias Tehia) was assigned to call the hotel’s switchboard to give sufficient advance warning to evacuate the hotel before the explosives were to be detonated. There is no historical consensus about what warnings were sent and received but Nissan records in her memoir The Girl from Babylon the part she played in the attack which killed 91 people and injured more. A 1981 New York Times story recounting a reunion of Irgun members involved in the attack, records Nissan’s recollection “that she had waited for a long time outside the hotel until she got a signal that the charges were planted. Then she telephoned the British command from a pharmacy across the street, she said, and spoke first in English, then in Hebrew: ‘This is the Hebrew resistance uprising. We planted bombs in the hotel. Please vacate it immediately. See, we warned you.’ Then, she said, she ran to King George Street and phoned the French Consulate, which was near the hotel. Then she went farther along and phoned The Palestine Post, a newspaper that is now The Jerusalem Post. She walked slowly up Jaffa Road, and as she passed a police station near the market at Mahane Yehuda, she recalled, ‘I heard the big explosion.’ When she learned later that the British had ignored her warnings, she said, ‘I was baffled; there we were, genuinely trying to save lives, and they took no heed,’” (“Ex-Guerrillas Reminisce At The King David Hotel,” The New York Times, September 26, 1981).

Our letter mentions Irgun member Yisrael Levy (1926?-1990) and a second Irgun member named Gal, possibly Yehoshua “Gal” Goldshmid (1925-1948), both Levy and Goldshmid took part in the bombing and Goldshmid, previously the youngest Irgun member to be commander of Jerusalem, was killed in action in May 1948.