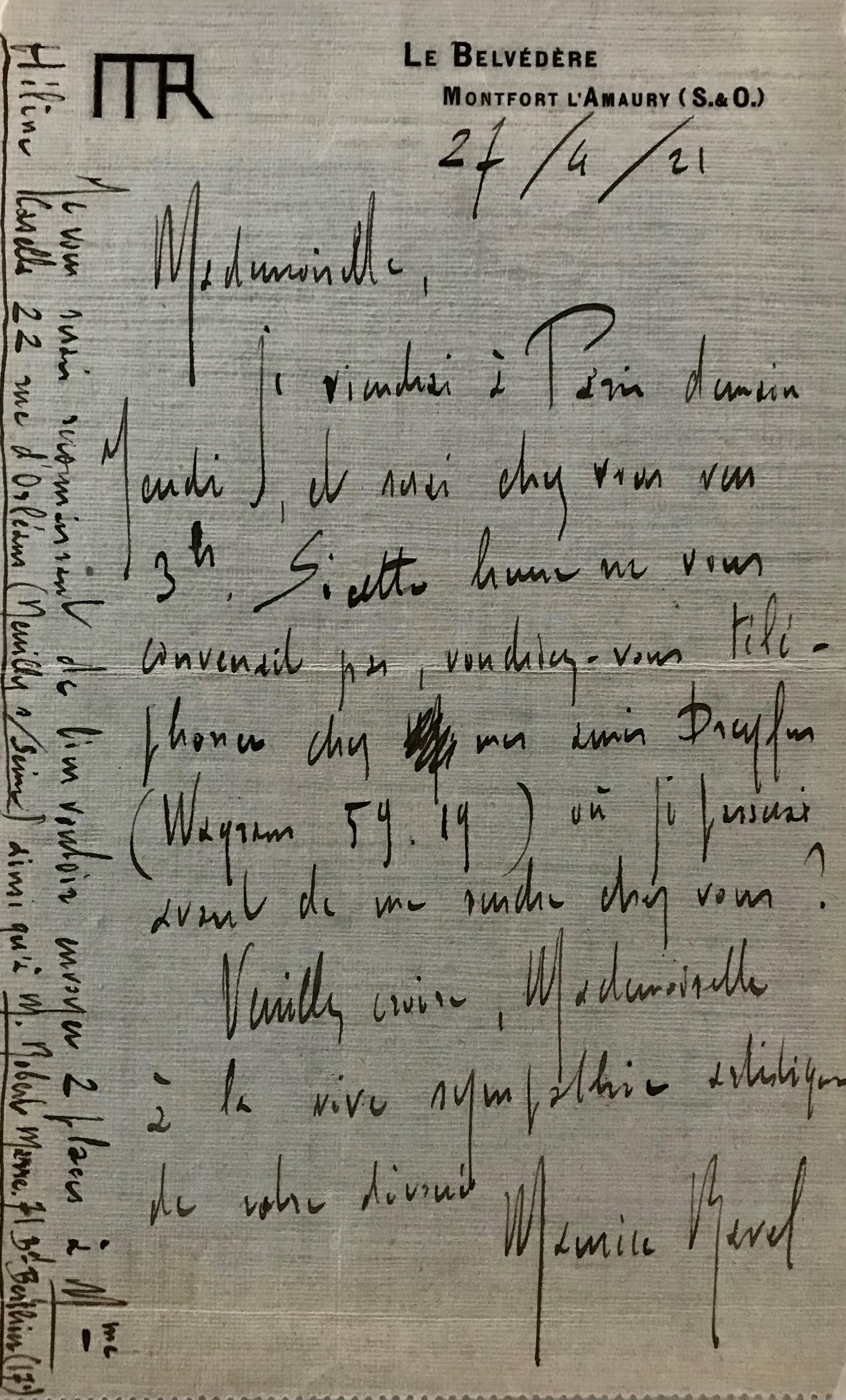 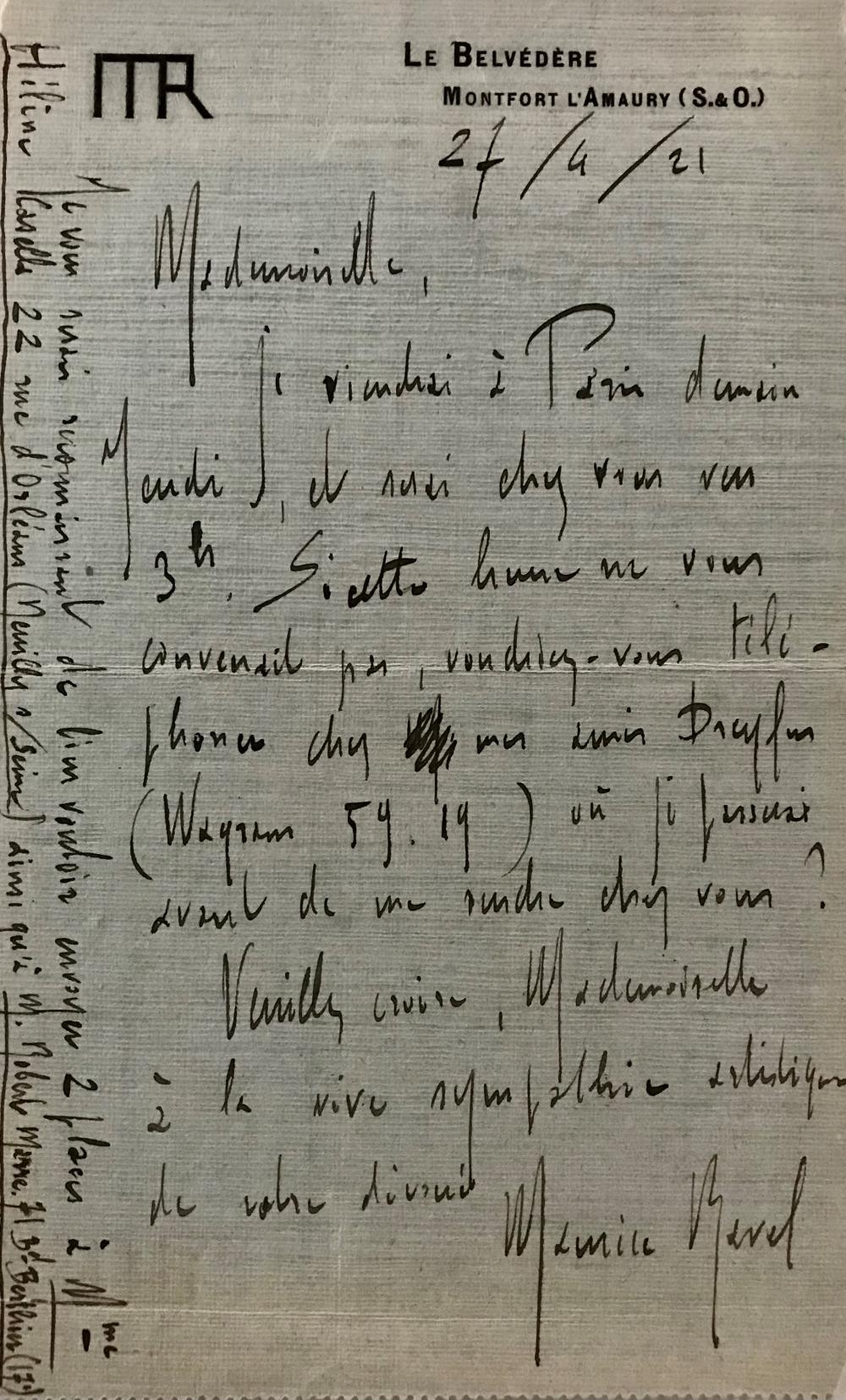 “I will come to Paris tomorrow, and will be at your place around 3 p.m. Should this time not suit you, would you please call my friends Dreyfus (Wagram 54 14) where I will go by before going to your place?

Please believe, mademoiselle, in the lively artistic sympathy of your devoted…

I would be grateful if you could send 2 tickets to Mrs. Hélène Casella 22 rue d’Orléans (Neuilly-sur-Seine) as well as to Mr. Robert Marre, 71 boulevard Berthier (17th) [Arrondissement].”

Born to a Swiss engineer father and a free-spirited Basque mother, Ravel’s early interest in music was fostered by his parents. In 1889, he was admitted to the legendary Paris Conservatoire where he studied under Charles-Wilfrid de Bériot and Gabriel Fauré. In 1891, Ravel won first prize in the Conservatoire’s piano competition but, “when it came to satisfying the authorities of his abilities in fugue writing he failed abysmally. In 1900 he again found himself excluded from the Conservatoire’s rolls,” when he was expelled from Gabriel Fauré’s composition class, (New Grove Dictionary). “Although he continued to attend Fauré’s class as an ‘auditeur’, his main official connection with the Conservatoire consisted in his several attempts to obtain the Prix de Rome for composition” and by January, 1903, Ravel had submitted the first movement of his String Quartet where it failed to win, (ibid.). After leaving school Ravel completed the quartet and dedicated it to Fauré who had consistently supported his artistic development. Ravel’s academic failings, “largely… a consequence of irreconcilable artistic ideals” between the young composer and the school, stands in contrast to his popular and critical success, (ibid.).

A painstaking composer, Ravel’s output was slow and varied. Nonetheless he was widely recognized as one of the leading French composers of his time for works including his 1910 piano suite Gaspard de la nuit; the 1911 opera L’heure espagnole; his ballet Daphnis et Chloé, commissioned by Sergei Diaghilev and premiered by the Ballets Russes in 1912; L’enfant et les sortilèges: Fantaisie lyrique en deux parties a 1925 opera composed to a libretto by Collette; and, most famously, the orchestral piece Boléro, commissioned by dancer Ida Rubinstein and which was influenced by his Spanish heritage.

Garcet De Vauresmont was a popular soprano who performed the works of Händel, Chopin, Fauré, and Debussy during the 1910s and 1920s and actively corresponded with composers about her performances. Our letter mentions Dreyfus, likely Ravel’s close friend Jean Dreyfus, the dedicatee of his 1895 piano composition Menuet antique at whose family home he recuperated after World War I. Hélène Casella was the first wife of Italian composer Alfredo Casella.

Written on a folded self-mailer, from Ravel’s new home Le Belvédère, located west of Paris in Montfort l’Amaury. Some slight wear; the address is written on the letter’s verso. In very good condition. [indexMusic]