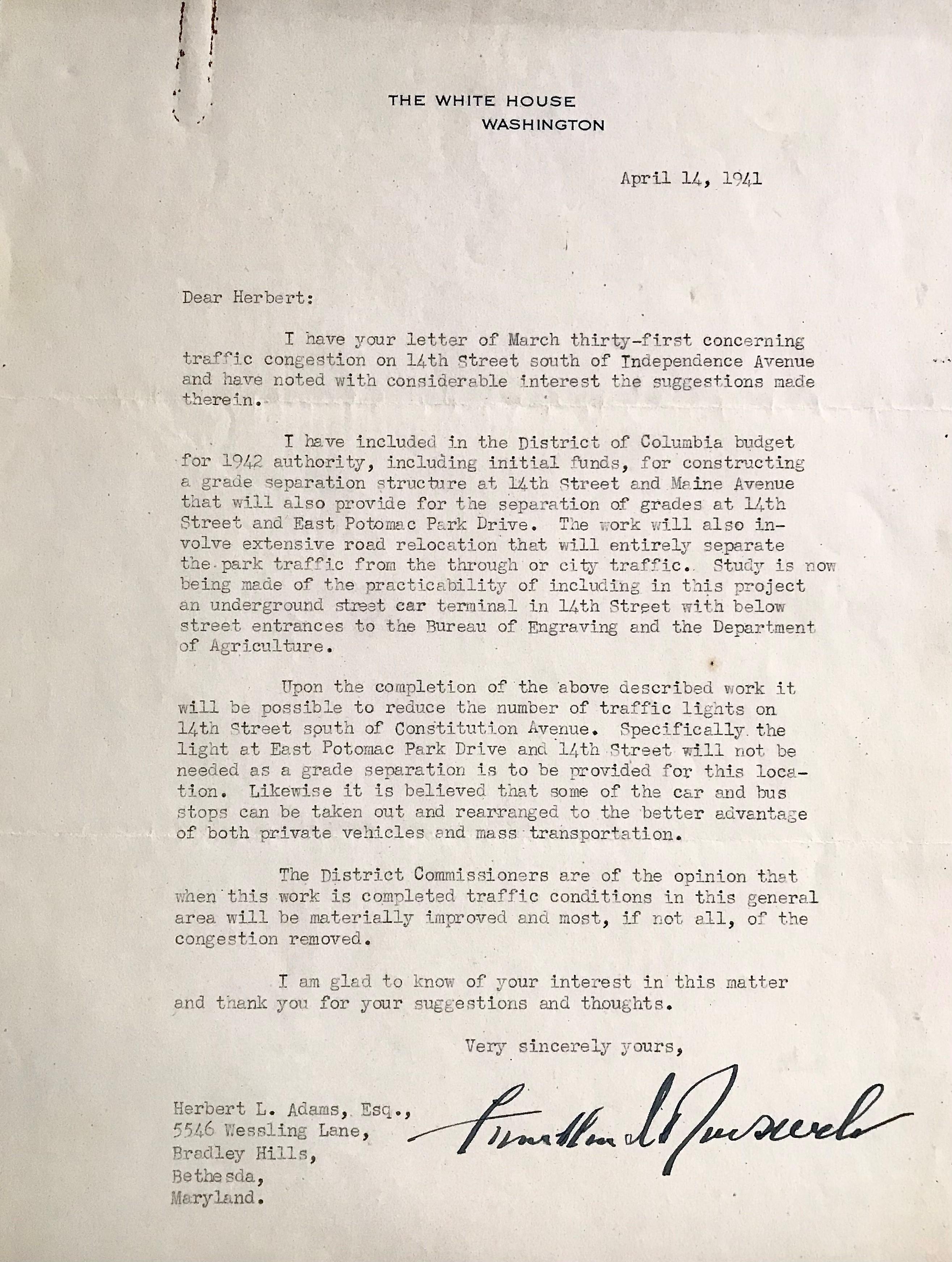 “I have your letter of March thirty-first concerning traffic congestion on 14th Street south of Independence Avenue and have noted with considerable interest the suggestions made therein.

I have included in the District of Columbia budget for 1942 authority, including initial funds, for constructing a grade separation structure at 14th Street and Maine Avenue that will also provide for the separation of grades at 14th Street and East Potomac Park Drive. The work will also involve extensive road relocation that will entirely separate the park traffic from the through or city traffic. Study is now being made of the practicability of including in this project an underground street car terminal in 14th Street with below street entrances to the Bureau of Engraving and the Department of Agriculture.

Upon the completion of the above described work it will be possible to reduce the number of traffic lights on 14th Street south of Constitution Avenue. Specifically the light at East Potomac Park Drive and 14th Street will not be needed as a grade separation is to be provided for this location. Likewise it is believed that some of the car and bus stops can be taken out and rearranged to the better advantage of both private vehicles and mass transportation.

The District Commissioners are of the opinion that when this work is completed traffic conditions in this general area will be materially improved and most, if not all, of the congestion removed…”

After the stock market crashed in October 1929, the American economy unraveled and the country sank into what came to be known as the Great Depression. As governor of New York FDR offered tax relief to local farmers thus creating the first state relief agency in the U.S. This and additional bold initiatives made him a national figure and helped him win the Democratic presidential nomination in July 1932. Upon accepting his nomination, Roosevelt promised a “new deal for the American people.” In November he was elected to the first of four presidential terms. The first hundred days of his presidency were marked by drastic reforms that brought immediate relief to the American people followed by additional initiatives that comprised Roosevelt’s New Deal designed to restore much of the economy while dramatically changing the nature of American government. The Works Project Administration (WPA), established in 1935, created construction jobs, employing workers to build out America’s infrastructure including 620,000 miles of streets and over 10,000 bridges.

An unintended consequence of FDR’s New Deal was a surge in the federal workforce which dramatically increased the population of the nation’s capital. “Between 1932, when Franklin D. Roosevelt was elected, and 1941, when the US entered the war, the District’s population rose by nearly 50%. It grew from 510,000 to 760,000 people, ultimately reaching 900,000 by 1943. This spike in population led to overloaded buses and streetcars, as well as severe automobile congestion. The city was in desperate need of transportation alternatives,” (“Advocates have pushed for a subway in DC since FDR and WWII,” Greater Greater Washington website, https://ggwash.org/view/78848/advocates-have-pushed-for-a-subway-in-dc-since-fdr-and-wwii-2, Rowlands). To deal with the congestion, bridges, traffic circles and the grade separations which are the subject of our letter, were built, and, after newspapers began advocating for running the streetcar lines underground, plans were drafted for a subway system. In fact, the Washington Post reported on April 8, 1941, “Construction of a subway from the downtown area north between the Soldiers Home was predicted yesterday by Traffic Director William A. Van Duzer as a result of a report now being prepared on the District’s traffic engineering problem… Unless steps such as the proposed subway are taken, the traffic situation will soon become ‘very serious.’” Unfortunately, America’s entry into World War II in December 1941, would scuttle the plan and Washington Metro would only open in 1976.

Folded with a paperclip mark in the upper left corner; darkly signed and in very good condition. [indexhistory]